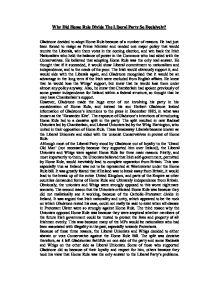 Why Did Home Rule Divide The Liberal Party So Decisively?

Why Did Home Rule Divide The Liberal Party So Decisively? Gladstone decided to adopt Home Rule because of a number of reasons. He had just been forced to resign as Prime Minister and needed one major policy that would reunite the Liberals, win them votes in the coming election, and win back the Irish Nationalists who held the balance of power in the Commons who had sided with the Conservatives. He believed that adopting Home Rule was the only real answer. He thought that if it succeeded, it would show Liberal commitment to nationalism and independence, and to the needs of the poor. The Irish would obviously support it, and would side with the Liberals again, and Gladstone recognised that it would be an advantage in the long term if the Irish were excluded from English affairs. ...read more.

Although most of the Liberal Party stood by Gladstone out of loyalty to the 'Grand Old Man' (not necessarily because they supported him over Ireland), the Liberal Unionists and Whigs were against Home Rule for three main reasons. Firstly, and most importantly to them, the Unionists believed that Irish self-government, permitted by Home Rule, would inevitably lead to complete separation from Britain. This was especially true as Ireland was not to be represented at Westminster under the Home Rule bill. It was greatly feared that if Ireland was to break away from Britain, it would lead to the break up of the entire United Kingdom, and parts of the Empire as other countries demanded forms of Home Rule and ultimately independence from Britain. Obviously, the unionists and Whigs were strongly opposed to this worst nightmare scenario. ...read more.

Some of those who supported Gladstone did so because of their loyalty and respect for him, others because they took his view that Home Rule was the only answer to the Liberal Party's problems. On the other hand, Chamberlain and the unionists and the rather conservative Whigs were totally against Home Rule and favoured finding another way of answering the party's problems which did not involve giving Ireland too much power. Chamberlain suggested a 'Radical Programme' which would win over farm workers by promising them land and livestock and would give the party a means of attacking Tory landowners. This programme would, however, anger the Whigs and upset some other Liberal supporters, so was rejected. Thus the Chamberlain unionists and Gladstonian Liberals had different ideas about how to fix the Liberal situation, and despised each other's ideas. A split was therefore inevitable, especially by the unionist radicals under Chamberlain who had less power and say in the party. ...read more.