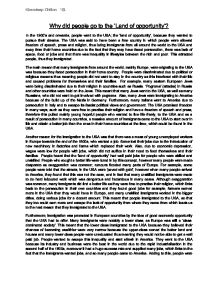 Why did people go to the Land of opportunity?

Why did people go to the 'Land of opportunity'? In the 1900's and onwards, people went to the USA; the 'land of opportunity', because they wanted to pursue their dreams. The USA was said to have been a free country in which people were allowed freedom of speech, press and religion, thus luring immigrants from all around the world to the USA and away from their home countries due to the fact that they may have faced persecution, there was lack of space, food or jobs and that there was inequality in lifestyles between the rich and poor. This attracted people, thus they immigrated. The main reason that many immigrants from around the world, mainly Europe, were migrating to the USA was because they faced persecution in their home country. People were discriminated due to political or religious reasons thus meaning people did not want to stay in the country as this interfered with their life and caused problems for themselves and their families. For example, many eastern European Jews were being discriminated due to their religion in countries such as Russia. 'Pogroms' (attacks) in Russia and other countries were held on the Jews. This meant that many Jews went to the USA, as well as many Russians, who did not want to get involved with pogroms. ...read more.

jobs for example, farmers earned more in the USA than they would have in Europe, and many unskilled immigrants worked in the bigger cities, doing various jobs for a decent amount. This meant that people immigrated to the USA, so that they too could earn more and escape the lack of opportunity from where they came from which leads us to the next reason that they immigrated to the USA. Furthermore, immigration was promoted in European countries by the idea of good economic opportunity that the USA had to offer. Many immigrants were notably a lower class, as Europe was still a 'class-dominated society'. This meant that the lower class immigrated to the USA because they believed their chances of becoming wealthier were very narrow because the upper-class owned the better land and houses and many lower class people were uneducated thus meaning they would not be able to get a well paid job. People wanted to escape this inequality and start afresh in America. They went to the USA because its industry and business were the best in the world due to the rapid industrialisation in the second half of the 1800s, moreover it had a huge success rate and supplied many jobs, which links to the fact that the immigrants wanted jobs, and so many people came to America. ...read more.

Furthermore, many natural resources could be found in America, including oil, timber and minerals, all at cheap prices. For example, Italy at that time had been a hugely overcrowded country in which poverty was common and a fascist government was in control. Many Italians sought freedom from the low wages and high taxes and immigrated to America, hence it gaining a huge Italian population. In the US, they were able to build a large Italian community, live with some freedom and were able to earn more. Consequently, The USA became a hugely diverse country as it 'pulled' in many immigrants from all over the world as it was known as the 'Land of opportunity'. Overall immigration to the USA in the late 1800s and early 1900s was due to many reasons, such as persecution, bad economic opportunity, lack of space and food and inequality between classes for the people in their home countries. These 'pushed' people out, however The USA 'pulled' them in as it offered freedom in religious and political views, more land and employment opportunity and overall a better lifestyle. Although some immigrants found life different then they expected as exaggeration was common only few gave up and went back home. In conclusion, people immigrated to the USA because they wanted to pursue their dreams. ?? ?? ?? ?? Kirandeep Dhillon 10L ...read more.