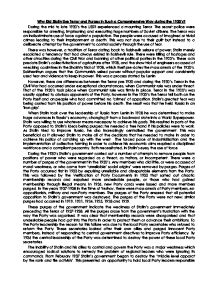 Why Did Stalin Use Terror and Purges in Such a Comprehensive Way during the 1930's?

Why Did Stalin Use Terror and Purges in Such a Comprehensive Way during the 1930's? During the mid to late 1930's the USSR experienced a mounting Terror. The secret police were responsible for arresting, imprisoning and executing huge numbers of Soviet citizens. The Terror was an indiscriminate use of force against a population. The people were accused of imagined or trivial crimes leading to their imprisonment or death. This was not due to their guilt but instead to a deliberate attempt by the government to control society through the use of fear. There was however, a tradition of Terror dating back to Bolshevik seizure of power; Stalin merely escalated a tendency that had always existed in Bolshevik rule. There were killing of hostages and other atrocities during the Civil War and banning of other political parties in the 1920's. These acts predate Stalin's collectivization of agriculture after 1928, and the show trial of engineers accused of wrecking coalmines in the Shakhty Trial of 1928, which itself pre-dates the mass arrests of the 1930's. Solzhenitsyn argues that the Communists seized power without popular support and consistently used fear and violence to keep in power. This was a process started by Lenin. However, there are differences between the Terror pre-1930 and during the 1930's. Terror in the Civil War had occurred under exceptional circumstances, when Communist rule was under threat. ...read more.

This was the prelude to the first major purge of the CPSU by Stalin. In the years 1933-1934 over a third of the total membership were excluded from the Party on grounds that they were 'Ruitinites'. The threat of expulsion from the Party was enough to force members to conform to official Party policy. In August 1936 the first of the great show trials began, involving Zinoviev, Kamenev and their allies. The next major strike, the attack upon the 'Right deviationists' was delayed. Stalin personally intervened to speed up the process. Yagoda, who had carried out the first purge, was considered to have shown too much sensitivity in his recent handling of the 'Trotskyite-Zinovievite' bloc, was replaced as head of the NKVD by the less scrupulous Yezhov. Yagoda was accused in one of the later show trials. This shows the speed at which the Terror was starting to consume its own kind. The explanation for the Great Terror and series of show trials, including that of Zinoviev and Kamenev in 1936, Piatakov in 1937 and Bukharin and members or the old Right deviation in 1938 was that Stalin used it to destroy anyone that ever opposed him, destroy anyone who had the potential to oppose him and so terrify and disorientate the population so that it was impossible for any opposition to his rule to be organised. ...read more.

This allowed him to bring in a new class of government and Party officials who were totally dependant on him and force members to conform to Party policy. There were genuine anxieties in the Party leadership about failures in the economy, foreign espionage, class-enemies and the inability of government to impose its will on regional Party leaders. It was this basic weakness, coupled with pressure by Party leaders such as Yezhov to remove secret police powers to remove bureaucrats who were stifling Revolutionary enthusiasm that led to the chaotic explosion of violence in 1937-1938.b Secondly there was fear of impending war which may have caused the Soviet leadership to think it necessary to remove any leaders capable of criticising Stalin's handling of foreign policy or conduct of war. Coupled with this was a genuine fear of counter-revolutionary spies in the pay of enemy countries. The revelation of a military plot caused Stalin to fear for his own personal safety and his loosing power. However there is a possibility that the military leaders, such as Marshal Tukhachevsky really were planning a coup against Stalin. So, Terror might have arisen out of a genuine, though brutal, desire to protect the Revolution. Finally terror and purges were used to speed up and discipline the economic factors working in the USSR to turn it from a backward state into a World Superpower. The Terror and purges also provided Stalin with scapegoats on which to blame political and economic failures, particularly the local Party leaders. ...read more.