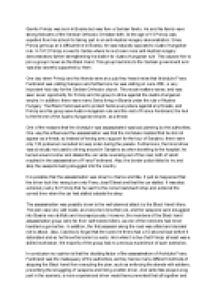 Why did the assassination of Franz Ferdinand succeed?

Transfer-Encoding: chunked ﻿Gavrilo Princip was born in Bosnia but was from a Serbian family. He and his family were strong followers of the Serbian Orthodox Christian faith. At the age of 15 Princip was expelled from his school for taking part in an anti-Austria Hungary demonstration. Since Princip grew up at a difficult time in Bosnia, he was naturally opposed to Austro Hungarian role. In 1912 Princip moved to Serbia where he met even more anti-Austria Hungary demonstrators further strengthening his dislike for Austro-Hungarian rule. This caused him to join a group known as the Black Hand. This group had links to the Serbian government and was also secretly supported by them. ...read more.

One way this influenced the assassination was that the Archduke insisted that he did not appear as a threat, so instead of having army support for the tour of Sarajevo, there were only 120 policemen recruited to keep order during the parade. Furthermore, the hired driver was obviously not used to driving around in Sarajevo as when travelling to the hospital, he turned around corner and stalled the car while reversing out of the road, both of which resulted in the assassination of Franz Ferdinand. Also, the border police failed to try and stop the weapons being smuggled into the country. It is possible that the assassination was down to chance and fate. ...read more.

And while it is true that Princip at least was a skilled marksman, the majority of the group had no previous experience of such scenarios. In conclusion my opinion is that the deciding factor of the assassination of Archduke Franz Ferdinand was the inadequacy of the authorities, as they had so many different methods of stopping the Black hand from executing the plan, such as enforcing the streets with soldiers, preventing the smuggling of weapons and hiring a better driver. And while fate played a big part in the scenario, a more experienced driver would have prevented that all together and the majority of the group were not experienced at all so that is why, for me, the authorities are to blame for the assassination. ...read more.