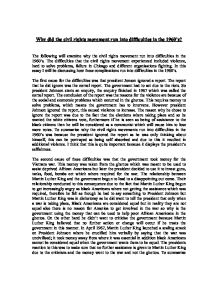 Why did the civil rights movement run into difficulties in the 1960's?

Why did the civil rights movement run into difficulties in the 1960's? The following will examine why the civil rights movement run into difficulties in the 1960's. The difficulties that the civil rights movement experienced included violence, hard to solve problems, failure in Chicago and different organisations fighting. In this essay I will be discussing how these complications run into difficulties in the 1960's. The first cause for the difficulties was that president Jonson ignored a report. The report that he did ignore was the cornel report. The government had to act due to the riots. So president Johnson starts an enquiry, the enquiry finished in 1967 which was called the cornel report. The conclusion of the report was the reasons for the violence are because of the social and economic problems which occurred in the ghettos. This requires money to solve problems, which means the government has to intervene. However president Johnson ignored the report, this caused violence to increase. The reason why he chose to ignore the report was due to the fact that the elections where taking place and so he wanted the white citizens vote, furthermore if he is seen as being of assistance to the black citizens then he will be considered as a communist which will cause him to lose more votes. ...read more.

The divisions between the SCLC and the local Chicago activists made organisation complicated. The demonstrators entered an all White area called Marquet Park, they were faced by racist abuse and cruelty. In the face of the disturbances, Daley made vague commitments to promoting integrated housing, but the reality was that little changed in Chicago. In the aftermath of his failure in Chicago, Martin Luther King turned in other directions. His concerns became increasingly focused on the economic plight of the poor of all races and at the time of his death in 1968 he was planning a "Poor People's March". in the meantime, the civil rights movement had moved in new and different directions. Due to all the chaos caused, Martin Luther King was portrayed as a nazi and communist. He believed that even though there wasn't a positive outcome, he managed to gain moral high ground however he didn't understand that even this was not achieved as the citizens of the north where not going to stay quite. To summarise the reason why the civil rights movement run into difficulties in 1960's was due to the fact that Martin Luther King did not understand the social and economic problems in the north he only believed that racism was present and because of this the social and economic problems had taken place, but ...read more.

These factors included president Johnson ignoring reports because he wanted the white Americans to vote for him and if he was seen assisting the African Americans then he will be considered as a communist this will result in him gaining less votes; lack of government action was the second factor, as the government used the money for the Vietnam war that was preliminary meant to be used for the ghettos. Martin Luther King disliked this idea and therefore criticised the president, and then the president came to the decision of not assisting the black Americans again because he got criticised due to his actions; the third factor was that the black northerners rejected Martin Luther King and they did not follow his idea of moral high ground which lead to violent in the towns; Martin Luther King's incorrect tactics in Chicago was the fourth factor, as he didn't understand that the poverty trap caused the social and economic problems and not due to racism and the final cause was Black Power, as Malcolm X said that you have to fight for what you want. Malcolm X didn't exactly say that violence will obtain what is required but this implies that by the use of violence you can get what you want. All these factors display why the civil rights movement run into difficulties in the 1960's it also gives the historian additional information about the influential figures of 1960's America. ...read more.