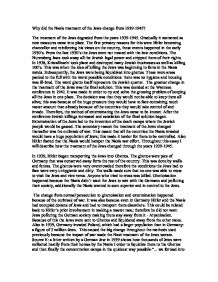 Why did the Nazis treatment of the Jews change from 1939-1945? The treatment of the Jews degraded from the years 1939-1945. Gradually it worsened as new measures came into place. The first primary reasons for this were Hitler becoming chancellor and reinforcing his views on the country, these events happened in the early 1930's. From the late 1930's the Jews were not treated with the best conditions. The Nuremberg laws took away all the Jewish legal power and stripped them of their rights. In 1938, Kristallnacht took place and destroyed many Jewish businesses as well as killing 100's. This was when the idea of killing the Jews was beginning to form in the Nazis minds. Subsequently, the Jews were being liquidized into ghettos. These were areas packed to the full with the worst possible conditions: there was no hygiene and housing was ill-bred. The word ghetto itself represents the Jewish quarter. The greatest change in the treatment of the Jews was the final solution. This was decided at the Wannsee conference in 1942. It was made in order to try and solve the growing problem of keeping all the Jews in one place. ...read more.

Other reasons for the change in the tactics used were the ideology of the Nazi leaders. Hitler didn't want the Jews getting in his way of winning the war; he also thought that they were likely to halter the Nazis ability After invading Russia with their population having 5 million Jews, there was a change of tactics. Beforehand the tactics were using the Einsatzgruppen: mobile killing squads controlled by the SS and arranged by Himmler. The Einsatzgruppen took over the German occupied territory and shot 1 million Jews. Einsatzgruppen came directly to the home communities of Jews and massacred them. Source F: the descriptions of the actions of the Einsatzgruppen by an eyewitness account form a German Builder, written in 1941 show how the use of the Einsatzgruppen was systematic: they shot Jews, made them dig graves, this portraying that they were organized with what they did, however the only unreliability in the source is the fact that no resource is given to back up the information giving proof that it was in fact used continuously. These methods were found inefficient and the conference at Wannsee was what gave the ongoing idea of a final solution. ...read more.

He believed at first that he didn't want them in his society and made actions towards them that would drive them away. However, when the outbreak of war came, Hitler had received tons of Jews in his control. Having invaded the countries and wanting them under his power without the Jews in the way to mess up his plans or winning the war Hitler was put into a situation of what to do with them. Facing economical pressure as well as pressure on how to solve the problem of what should be done with all the Jews Hitler gave permission for them to be eliminated through extermination. The final solution was the final act of whet should be done in order to achieve this. This easily shows that Hitler's and the Nazis actions were not made through a plan which ran all the way through their rain. Throughout time Hitler had received events that made his change in the tactics. Earlier he had also alleged that if a war broke out tremendous suffering of the Jews would be unleashed. Concluding, the vital events, the outbreak of war and the ideology present from the begging as well as changing theories that happened during the years made the great consequences and changes towards the Jews. ...read more.