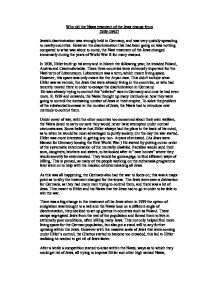 Why did the Nazis treatment of the Jews change from

Why did the Nazis treatment of the Jews change from 1939-1945? Jewish discrimination was strongly held in Germany, and was very quickly spreading to nearby countries. However the discrimination that had been going on was nothing compared to what was about to come, the Nazi treatment of the Jews changed immensely during the years of World War II for many reasons. In 1938, Hitler built up his army and in March the following year, he invaded Poland, Austria and Czechoslovakia. These three countries were extremely important for the Nazi term of Lebensraum. Lebensraum was a term, which meant living space. However, this space was only meant for the Aryan race. This didn't include what Hitler saw as vermin, the Jews that were already living in the countries, or who had recently moved there in order to escape the discrimination in Germany. He was already trying to control this "inferior" race in Germany and now he had even more. ...read more.

This is proved, as many of the people working on the euthanasia programme later went on to help with the mission of exterminating all Jews. As this was all happening, the Germans also had the war to focus on; this was a major point as to why the treatment changed for the worse. The Jews were seen a distraction for Germans, as they had many men trying to control them, and there was a lot of Jews. This meant to Hitler and his Nazis that the Jews had to go in order to be able to win the war. There was a big change in the treatment of the Jews when in 1939 the option of emigration was brought to a halt and the Nazis took on a different angle of discrimination, they decided to set up ghettos in countries such as Poland. These camps segregated Jews from the rest of the population and forced them to live in extremely poor conditions, often killing many Jews. ...read more.

With the start of the war, Hitler obviously sped up his invasion of neighbouring countries, therefore leaving more Jews to kill. Finally this lead to the realisation of what was happening; Hitler had to find another efficient way of killing the Jews due to the stress of his soldiers. This is what led to the gassing of the Jews, this was found to be an incredibly easy way of killing Jews as you didn't need many soldiers to do it and it could be done quickly on a massive scale. There are many reasons as to why the treatment towards the Jews changed, many people believe that Hitler had always had the idea of killing the Jews in such vulgar ways and on such massive scales, however many also believe that it all came about due to the way the Nazis all wanted to gain power, therefore wanting bigger better ways of purifying Europe. I however believe only the fact that it was a combined effort from both Hitler and his Nazis that changed the treatment of the Jews from discrimination to killing. ...read more.