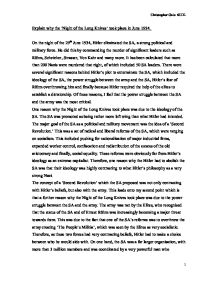 Why did the Night of the Long Knives take place?

Explain why the 'Night of the Long Knives' took place in June 1934. On the night of the 29th June 1934, Hitler eliminated the SA, a strong political and military force. He did this by commanding the murder of significant leaders such as R(hm, Scheicher, Strasser, Von Kahr and many more. It has been calculated that more than 200 Nazis were murdered that night, of which included 50 SA leaders. There were several significant reasons behind Hitler's plot to exterminate the SA, which included the ideology of the SA, the power struggle between the army and the SA, Hitler's fear of R(hm overthrowing him and finally because Hitler required the help of the elites to establish a dictatorship. Of these reasons, I feel that the power struggle between the SA and the army was the most critical. One reason why the Night of the Long Knives took place was due to the ideology of the SA. The SA was promoted as being rather more left wing than what Hitler had intended. The major goal of the SA as a political and military movement was the idea of a 'Second Revolution.' This was a set of radical and liberal reforms of the SA, which were verging on socialism. ...read more.

the offices of chancery and presidency together and claim himself to be 'F(hrer' as their was no one else to oppose him. To conclude, the 'Night of the Long Knives' helped Hitler to establish his dictatorship for several reasons; it made the army loyal, it won the support of the elites, put the SA under the control of Hitler and finally eliminated the last of the opposition against Hitler's ideology. Of these reasons, I believe that the most significant outcome of the 'Night of the Long Knives' which helped to establish Hitler's dictatorship was that it gained the support from the elites. The elites' power and wealth was a necessity in order for Hitler to succeed. The most powerful of the elites, President Hindenburg was the only man who could help Hitler achieve the power he desired and therefore by gaining his support and trust, he was able to eventually gain full control over Germany. Furthermore, the elites controlled the army and therefore if Hitler gained the trust and support of the elites, it would be far easier for him to make the army loyal to him as they were a very powerful organisation and potentially a significant threat to him. ?? ?? ?? ?? Christopher Gale 6CDL ...read more.