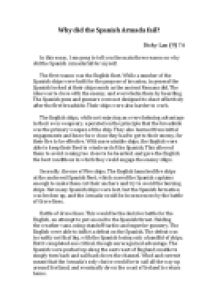 Why did the Spanish Armada fail?

﻿Why did the Spanish Armada fail? Dicky Lau (9) 7A In this essay, I am gong to tell you the main three reason on why did the Spanish Armada fail for myself. The first reason was the English fleet. While a number of the Spanish ships were built for the purpose of invasion, in general the Spanish looked at their ships much as the ancient Romans did. The idea was to close with the enemy, and overwhelm them by boarding. The Spanish guns and gunners were not designed to shoot effectively after the first broadside. Their ships were also harder to work. ...read more.

Secondly, the use of Fire ships. The English launched fire ships at the anchored Spanish fleet, which scared the Spanish captains enough to make them cut their anchors and try to avoid the burning ships. Not many Spanish ships were lost, but the Spanish formation was broken up, and the Armada would be in some mess by the battle of Grave lines. Battle of Grave lines. This would be the decisive battle for the English, an attempt to put an end to the Spanish threat. Holding the weather vane, using standoff tactics and superior gunnery, The English were able to inflict a defeat on the Spanish. ...read more.

Last but not least, they were failed also because of the weather. Once forced to commit to sailing around England, the Armada was doomed. The place is infamous for its weather, and the Spanish Armada would end up sailing north and into one of the storms of that place. It was the weather that would inflict the most injuries on the Spanish fleet, sinking or driving on land almost half of those ships. Thousands of Spanish sailors would die, and the balance of power on the seas would shift from then out to the British. Overall, I think that the most important reason was the fire ships. Since it was the only one that could make the Spanish Armada?s formations to be broken up and so it could let them be messed up. ...read more.