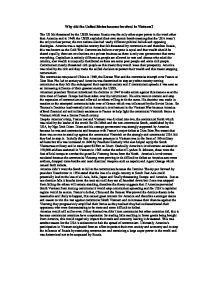 Why did the United States become involved in Vietnam?

Why did the United States become involved in Vietnam? The US felt threatened by the USSR because Russia was the only other super power in the word other than America and in 1949, the USSR exploded their own atomic b**b meaning that the USA wasn't the only nuclear power, the two nations also had vastly different political beliefs and opposing ideologies. America was a capitalist country that felt threatened by communism and therefore Russia, this was known as the Cold War. Communists believe everyone is equal and that wealth should be shared equally, there are no elections or a private business as there is only one government that owns everything. Capitalism is entirely different as people are allowed to vote and choose who ruled the country, also wealth is unequally distributed so there are some poor people and some rich people. Communism mostly threatened rich people as this meant they would loose their prosperity. ...read more.

Despite America's help, France lost and Vietnam was divided into two, the communist North which was ruled by the leader of the revolt Ho Chi Minh and the non-communist South, established by the USA, by Ngo Dinh Diem. Diem and his corrupt government was strongly supported by America because he was anti-communist and because with France's major defeat at Dien Bien Phu meant that there was no one to stand up against the communist Vietminh so the strongly anti-communist USA felt they had to step in. Initially the first American presence in Vietnam was in the form of 100 military advisors but this was increased to 1600 by President Kennedy who also helped equip the South Vietnamese military and in total spent $270m on Diem. Gradually America's involvement escalated to 150,000 soldiers stationed in Vietnam in 1965 under the order of Lyndon B. Johnson, these were the first official troops to combat the guerrilla Vietcong forces from the North. ...read more.

France's defeat, China and the Korean War proved the domino theory to be reasonable and likely to happen, this caused great concern for America and therefore a stronger desire and reason to win the war against communist North Vietnam and to increase their chances against the Vietcong they progressively amplified their forces as they realised they had underestimated their opponents who were demonstrating to be more and more difficult to defeat. America would still suffer even if they themselves didn't turn communist but other countries did, this is because communist countries have a reputation for trading little resulting in fewer goods being bought from America, this would negatively impact their trade and economy leaving it devastated. This was another reason for the USA's endeavour to halt the spread of communism. Ultimately America's participation in Vietnam originated from an effort to protect their own society and economy and to stop the influence of Russia by restricting communism and remaining a large super power in the world and was determined not to be surpassed by Russia. ...read more.