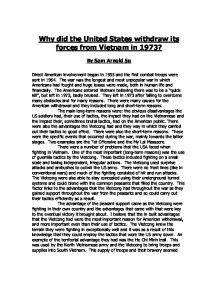 Why did the United States withdraw its forces from Vietnam in 1973?

Why did the United States withdraw its forces from Vietnam in 1973? By Sam Arnold 5u Direct American involvement began in 1955 and the first combat troops were sent in 1964. The war was the longest and most unpopular war in which Americans had fought and huge losses were made, both in human life and financially. The Americans entered Vietnam believing there was to be a "quick kill", but left in 1973, badly bruised. They left in 1973 after failing to overcome many obstacles and for many reasons. There were many causes for the American withdrawal and they included long and short-term reasons. The main long-term reasons were: the obvious disadvantages the US soldiers had, their use of tactics, the impact they had on the Vietnamese and the impact their, sometimes brutal tactics, had on the American public. There were also the advantages the Vietcong had and they way in which they carried out their tactics to good effect. There were also the short-term reasons. These were the specific events that occurred during the war, mainly towards the latter stages. Two examples are the Tet Offensive and the My Lai Massacre. There were a number of problems that the USA faced when fighting in Vietnam. One of the most important (long-term reasons) was the use of guerrilla tactics by the Vietcong. ...read more.

As a result of the failure of conventional methods the USA used chemical warfare. This included the use of Napalm and Agent Orange. These were used to strip the land bare and flush the Vietcong out of the jungle. This is where the impact of US tactics on the Vietnamese links to the use of US tactics. As the Americans employed more and more chemical warfare so the hatred felt by the Vietnamese grew. The Americans attempted to win back Vietnamese support with the use of strategic villages. These were whole villages kept behind barbed wire, sometimes entirely moved to a different location. Special aid was also given to villagers, but this had limited success. Huge numbers of bombs were dropped on North Vietnamese military bases, but this just seemed to strengthen the resolve of the Vietcong. But the most publicised tactical misdemeanour made by the US was the My Lai Massacre. This was a short-term reason for American withdrawal and occurred in 1968. US troops were instructed to kill all 700 of a small village that was supposed to be housing Vietcong soldiers. The majority of the village were women, children or elderly. When the US soldiers left the village there had been around 150 villagers killed and only a handful of Vietcong casualties. But I do not believe the inadequate use of US tactics to be the most important reason as they only became inadequate as a result of the superior tactics of the Vietnamese and the advantages they held. ...read more.

This short-term reason for American withdrawal links to the use of expensive tactics by the USA as it was the event that finally made the Americans see their tactics were never going to work. Another short-term reason for American withdrawal was the Paris Peace Talks that began in 1968. They signalled the beginning of the end of the war and in 1970 the number of US troops in Vietnam began to fall. By 1972 there were just 47,000 troops in Vietnam, compared to 539,000 in 1969. The withdrawal process of removing American troops and replacing them with South Vietnamese troops was called Vietnamisation. It was completed in 1973 and was brought about as a result of all the factors combined. The Peace Talks brought about the end, but were not the most important reason for American withdrawal, just an inevitable result of the American failure to succeed in Vietnam. In conclusion I believe that the advantages that the Vietcong had from the beginning of the war were the most important reason for American withdrawal. The Vietcong used the advantages to employ their extremely efficient tactics. These tactics were the downfall of the USA and meant victory for the USA could never be attained. Even though the US troops were inexperienced, it was the use of frustrating tactics that could only be used with the advantages they had that meant the Vietcong could never be defeated. The USA finally realised that they could never emerge victorious and it was that that persuaded them to withdraw in 1973. ...read more.