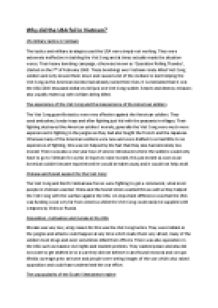 Why did the USA fail in Vietnam?

﻿Why did the USA fail in Vietnam? US military tactics in Vietnam The tactics and military strategies used the USA were simply not working. They were extremely ineffective in tackling the Viet Cong and at times actually made the situation worse. Their heavy bombing campaign, otherwise known as ?Operation Rolling Thunder?, started on the 7th of February 1965. These bombings over Vietnam rarely killed Viet Cong soldiers and only slowed them down and caused a lot of the civilians to start helping the Viet Cong as the American bombs had already ruined their lives. It is estimated that it cost the USA $400 thousand dollars to kill just one Viet Cong soldier. ...read more.

There was also a one-year tour of service introduced where the soldiers would only have to go to Vietnam for a year in hopes to raise morale, this just meant as soon as an American soldier became experienced he would be taken away and it would not help at all. Chinese and Soviet support for the Viet Cong The Viet Cong and North Vietnamese forces were fighting to get a communist, what most people in Vietnam wanted. China and the Soviet Union wanted this as well so they helped the Viet Cong with the warfare against the USA. An important difference was that the USA was funding a war very far from America whilst the Viet Cong could easily be supplied with weapons by China or Russia. ...read more.

They wanted peace and also did not want to get drafted in to a war they did not believe in and found immoral and corrupt. Media coverage grew at home and people were seeing images of the war which also raised opposition and could have undermined the war effort. The unpopularity of the South Vietnamese regime The South Vietnamese regime which was first led by Ngo Dinh Diem, then he was killed and replaced by his generals who were just as bad. The regime was very anti-communist (most people in Vietnam wanted communism), they were very corrupt and did not help the peasants of Vietnam. Furthermore they were not Buddhist and treated the high Buddhist priests with little respect, they were very influential so many people started turning against the regime. They started to help the Viet Cong such as hiding them in their villages. ...read more.