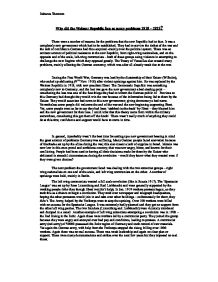 Why did the Weimar Republic face so many problems 1918 - 1923? There were a number of reasons for the problems that the new Republic had to face. It was a completely new government which had to be established. They had to survive the defeat of the war and the lack of confidence Germans had thus acquired -mainly over the political system. There was an eminent amount of political resistance to the new Republic, from right-wing nationalists, and on the opposite end of the scale, left-wing communists - both of these groups using violence in attempting to challenge the new Regime which they opposed greatly. The Treaty of Versailles also created many problems, mainly affecting the German economy, which was after all already weak due to the war. During the First World War, Germany was lead by the dictatorship of their Kaiser (Wilhelm), who ended up abdicating (9TH Nov. 1918) after violent uprisings against him. He was replaced by the Weimar Republic in 1918, with new president Ebert. The Democratic Republic was something completely new to Germany, and the lost war gave the new government a bad starting point - considering the loss was one of the first things they had to inform the German public of. Previous to this Germany had thought they would win the war because of the information being fed to them by the Kaiser. They would associate bad news to this new government; giving democracy a bad name. ...read more.

The Freikorps were now in charge, nevertheless there was still not much support, and even more workers went on strike because they disapproved of them so much. After only four days in charge, Ebert's government came back into power. There was another revolt in November 1923, at the time when hyperinflation was at its worst. It was named the Munich Putsch and was lead by the Nazi party, headed by Adolf Hitler and Ludendorff (a WW1 hero also involved in the Kapp Putsch). Their support had grown from around 6000 to 55000 members in 1923 and they had a private army (named the 'SA' - storm troopers - lead by Ernst Rohm). They believed democracy was weak, and that there should only be one leader, and so they wanted to take over the government and put Ludendorff in charge. Hitler, along with 600 of the SA burst into a meeting where Kahr (Bavarian leader) was speaking and forced him to support their plan. Again this was not properly planned, and not long after Kahr withdrew his support. The German army fought the Nazis, leading to the death of 14 Nazis. The leaders were arrested - including Hitler who was sent to jail for 5years (even though he only served 9months). Problems, of course, arose from the signing of the Treaty of Versailles, 1919. Aspects of this affected Germany greatly. It was split in two, allowing Poland direct access to the sea. ...read more.

Factory workers would have begun to be paid everyday and their bosses would have attempted to keep up with the inflation - often they would take wages home in wheelbarrows and then if they went into a shop leaving their wheelbarrow containing millions, if not billions of marks outside it would be more likely that the wheelbarrow was stolen - the money left on the floor. Someone who had saved up money which they were now living on would be in a terrible state. They may have had savings large enough to buy a house in 1920, but now they couldn't even afford a loaf of bread. There are a few examples of people who would gain from the inflation. Anyone who had debts or loans in 1920 would easily be able to pay these off now - leaving them with something much more valuable - possibly land or a house etc. The disaster that was hyperinflation desperately needed to be solved. A new leader was brought in - Gustav Stresemann, he brought new support to the government (he was a leading member of every govt.). He decided that marks needed to be destroyed - so he came up with the Retenmark to start the end of the hyperinflation crisis. To help rebuild industry, Germany acquired loans of around 800million marks from the USA under the 'Dawes Plan' and passive resistance was called off. With time Germany's political status was rebuilt, the economy was under control, and eventually they became accepted by the rest of Europe again. ?? ?? ?? ?? Rebecca Thornton ...read more.