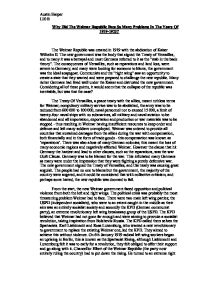 Why Did The Weimar Republic Face So Many Problems In The Years Of 1919-1923? The Weimar Republic was created in 1919 with the abdication of Kaiser Wilhelm II. The new government was the body that signed the Treaty of Versailles, and to many it was a betrayal and most Germans referred to it as the "stab in the back theory". The consequences of Versailles, such as reparations and land loss, were severe to Germany, and many were looking for someone to blame, the government was the ideal scapegoat. Communists and the "right wing" saw an opportunity to create a state that they wanted and were prepared to challenge the new republic. Many richer Germans had lived well under the Kaiser and distrusted the new government. Considering all of these points, it would seem that the collapse of the republic was inevitable, but was that the case? The Treaty Of Versailles, a peace treaty with the allies, meant ruthless terms for Weimar; compulsory military service was to be abolished, the army was to be reduced from 600 000 to 100 000, naval personnel not to exceed 15 000, a limit of twenty-four naval ships with no submarines, all military and naval aviation to be abandoned and all importation, exportation and production or war materials was to be stopped - thus resulting in Weimar having insufficient resources to keep order and defence and left many soldiers unemployed. ...read more.

They fired killing 16 inner core Nazis. Hitler escaped with a dislocated shoulder but was caught, as were the other leaders, and put on trail in 1924. He was only given 5 years and was let out after 5 months. His putsch failed because he didn't have the support of the army and police. This revolt had the most devastating long-term affects for the Weimar. Even though it had been easily crushed and showed how little power the Nazis actually had, Hitler turned his trail into a public event and wrote his book "Mein Kampf" which gave Hitler time to express his feelings and think of how to tackle the government again, e.g. by voting not violence, put the Nazis on the international scene, gave the Nazis publicity, e.g. Hitler's trail reached front covers and Hitler became a right wing hero. All of this led to Hitler having a short sentence when he should have been killed, getting out early helped Hitler to try and get rid of the Government while it was still unstable. The political instability was made worse by the financial implications of the Treaty of Versailles. By 1921, the level of reparations had been fixed to 132,000,000 gold marks. It was clearly evident that the weakened Germany would not be able to pay. ...read more.

The public blamed their problems on the Treaty of Versailles, and in turn, blamed the government that signed it. The new government had inherited a difficult situation. It was inevitable that the new government would have faced difficulties from the start, but to say they were doomed and would of never had a chance to overcome all the problems they did face, is unfair. The republic was beginning to overcome it's difficulties during the mid 1920's as economic, political, and cultural improvements were occurring, and if it hadn't been for circumstances, mainly the Wall Street Crash, the republic may have prospered for many years. It is clear to see that many factors lead to the Weimar Republic having so many problems to deal with, however two factor are just slightly more devastating than the others, one factor is that they were the ideal target to blame the countries' problems on, for example the treaty of Versailles. The other main factor was the opposition of the extremists from the start, which helped portray the government as violent, and it made people ask questions about the Government's lack of leadership, control and if they really were in safe hands. Nevertheless all the factors led to huge problems for Weimar. Hiden states that, "No one factor was responsible for the collapse of the Weimar republic, but the combination of factors and circumstances that lead to it's down fall." Austin Harper L10 B ...read more.