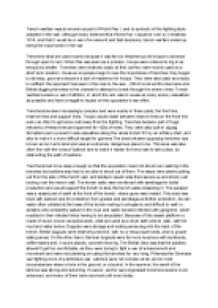 Why did trenches develop and what were their key features?

Transfer-Encoding: chunked ﻿Trench warfare was an enormous part of World War I, and is symbolic of the fighting style adopted in the wall. Although many believed that World War I would be over by Christmas 1914, and that it would be a war of movement and fast decisions, trench warfare ended up being the major tactic in the war. Trenchers what are used mainly because it was far too treacherous for troops to advance through open to rain. When this was seen as a problem, troops were ordered to dig in as temporary shelter. Trenches were relatively basic at first, as they were mainly used as a short term solution. However as people begin to see the importance of trenches, they began to develop, grow and become a sort of residence for troops. ...read more.

They were also built in zigzag formations as to prevent mass casualties along the whole trench if it by an artillery shell, and also to make it a more difficult target for gunners.The area between opposing trenches was known as no man's land and was an extremely dangerous place to be. This area was also often line with the rows of barbed wire to make it harder for trend rate to take place, by obstructing the path of soldiers. Trenchers had to be deep enough so that the opposition could not shoot men walking in the trenches but soldiers also had to be able to shoot out of them. Fire steps were planks jutting out from the side of the trench wall, and soldiers would raise themselves up and shoot, just looking over the trench wall. ...read more.

Dugouts were storage and resting areas dug into the back of the trench. British dugouts were relatively primitive, with no or less proper beds, and no proper eating areas. On the other hand, German dugouts were far more luxurious with bunkbeds, coffee tables and, in some places, concrete flooring. The British idea was that the soldiers shouldn't get too comfortable, as they were trying to fight a war of advancement and movement and were not planning on using the trenches for very long, Whereas the Germans war fighting more of a defensive war. Latrines were not complex at all, and in most circumstances where a hole in the ground, or a bucket. In the summer, the smell of the latrines was strong and sickening. However, as the war progressed trenches became more advanced, and many of them have survived until even today. ...read more.