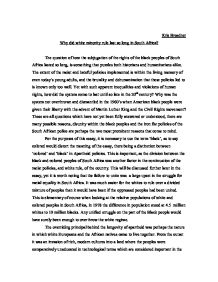 Why did white minority rule last so long in South Africa?

Kris Breadner Why did white minority rule last so long in South Africa? The question of how the subjugation of the rights of the black peoples of South Africa lasted so long, is something that puzzles both historians and humanitarians alike. The extent of the racist and hateful policies implemented is within the living memory of even today's young adults, and the brutality and dehumanization that these policies led to is known only too well. Yet with such apparent inequalities and violations of human rights, how did the system come to last until so late in the 20th century? Why was the system not overthrown and dismantled in the 1960's when American black people were given their liberty with the advent of Martin Luther King and the Civil Rights movement? These are all questions which have not yet been fully answered or understood, there are many possible reasons, disunity within the black peoples and the iron fist policies of the South African police are perhaps the two most prominent reasons that come to mind. For the purposes of this essay, it is necessary to use the term 'black', as to say colored would distort the meaning of the essay, there being a distinction between 'colored' and 'black' in Apartheid policies. ...read more.

Another of the iron fist strategies employed was the Bantu Authorities Act, the idea of this was to effectively exclude Black people from the country's politics. These policies were laid down in 1951 and were the basis for creating what were known as 'Homelands'. These were areas where black workers would have to live, yet they were considered as being outside the country, which meant that those who lived in the Homelands were required to carry passports when in South Africa. Between 1976 and 1981, four of these Homelands were created, denationalizing nearly half of the black South African population. This was an attempt to place black peoples even lower on the social scale and further strengthen the white dominated state. Rights such as voting were restricted to the Homeland in question, therefore there could be no chance of Black interaction in South African politics. This was combined with the Bantu Administration Board who kept account of Black movement within the country through the influx control system, effectively, the government stranglehold on society was so strong that white rule would last for an exceptionally long time within the country. ...read more.

This was combined with a growth in the economy in the late 60's which gave the police the resources they needed to keep tight control. White power continued and to an extent strengthened during the 60' and 70's, yet after Sharpville, the eyes of the world were upon South Africa. The repressions also strengthened African Nationalism, and subsequently the need for more repressions, such as the repressions of the Sueto Uprising. Such brutality was enough for foreign trade to be significantly effected, and for the U.N to place trade embargos on the country. Weapons and intelligence equipment were withdrawn, and as such, so were the implements for repression. White rule lasted due to its strength and brutality, and also its efficiency at dealing with black protests. However, it was this strength of brutality that would lead to its eventual downfall, it was only for so long that the NP could possibly keep a repressed people in such conditions. The strong tide of international anti-racism in a world where public access to proof is constantly available through the media was more than the country could withstand. Thankfully the white rule of South Africa was unable to withstand the world's reaction to the nature of brutality enmeshed within the state which seemed to be trapped in the times of Emperial Europe. ...read more.