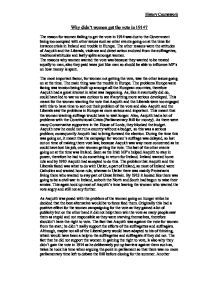 Why didn't women get the vote in 1914? The reason for women failing to get the vote in 1914 was due to the Government being too occupied with other issues such as other events going on at the time for instance crisis in Ireland and trouble in Europe. The other reasons were the attitudes of Asquith and the Liberals, violence and direct action endured from the suffragettes, traditional attitudes and lastly splits amongst women. The reasons why women wanted the vote was because they wanted to be treated equally to men, also they paid taxes just like men so should be able to influence MP's on how money is spent. The most important factor, for women not getting the vote, was the other issues going on at the time. The main thing was the trouble in Europe. The problems Europe were facing was tension being built up amongst all the European countries, therefore Asquith had a great interest in what was happening. As, like it eventually did do, could have led to war so was curious to see if anything more serious developed. This meant for the women wanting the vote that Asquith and the Liberals were too engaged with this to have time to sort out their problem of the vote and also Asquith and the Liberals saw the problems in Europe as more serious and important. ...read more.

them win the vote as many people saw them as stupid and not responsible as they were starving themselves, therefore shouldn't have the right to vote. The fact that Asquith was against the vote for women from the start; he didn't really support the efforts of the suffragettes and suffragists. Although, maybe not all of the Liberal party would have adapted to his of thinking, which would have been a help to the suffragettes and suffragists if they did not. The fact that he did not support the women in gaining the right to vote, is also why they didn't gain the vote in 1914 as he deliberately put up barriers against them such as, twice he took his time when arguing the point in parliament so that there was no more parliamentary time left to debate the Bill before closing for the summer. Another major concern for Asquith was the Conciliation Bill; this was a suggested new law to give women the vote. This at first seemed very promising to al the women who wanted the vote. The suffragettes were so sure they were going to get it this time they called a truce with Asquith; no more violence. ...read more.

So in the end this did not help them. To conclude this essay I think that all of the issues discussed in this essay did have a part to play in women not getting the vote by 1914. I think the most important reason was the other events; trouble in Europe, Crisis in Ireland and the Constitutional crisis. I think this because the trouble in Europe could have meant the whole country going to war, which is more important than a vote as this was people's lives, families and homes that could have been lost. Also, if the Government did not have any money to run the country with then we would have lost the war and if the crisis in Ireland had turned into a civil war, then Britain would have been dragged into and forced to help out in Ireland as well. A lot of the other issues gained publicity for the campaign for the vote for women but this publicity was not always positive, therefore it did not really help them. When all the issues are put together it is clear on how much of a struggle the women wanting suffrage went to, with all these problems to deal with as well as actually getting what they intended to; the vote. ?? ?? ?? ?? History Coursework ...read more.