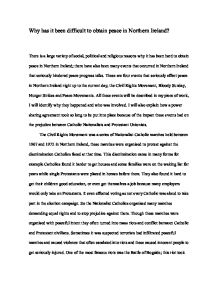 Why has it been difficult to obtain peace in Northern Ireland?

Why has it been difficult to obtain peace in Northern Ireland? There is a large variety of social, political and religious reasons why it has been hard to obtain peace in Northern Ireland; there have also been many events that occurred in Northern Ireland that seriously hindered peace progress talks. These are four events that seriously effect peace in Northern Ireland right up to the current day, the Civil Rights Movement, b****y Sunday, Hunger Strikes and Peace Movements. All these events will be described in my piece of work, I will identify why they happened and who was involved. I will also explain how a power sharing agreement took so long to be put into place because of the impact these events had on the prejudice between Catholic Nationalists and Protestant Unionists. The Civil Rights Movement was a series of Nationalist Catholic marches held between 1967 and 1972 in Northern Ireland, these marches were organised to protest against the discrimination Catholics faced at that time. This discrimination came in many forms for example Catholics found it harder to get houses and some families were on the waiting list for years while single Protestants were placed in homes before them. They also found it hard to get their children good education, or even get themselves a job because many employers would only take on Protestants. It even effected voting as not every Catholic was aloud to take part in the election campaign. So the Nationalist Catholics organised many marches demanding equal rights and to stop prejudice against them. Though these marches were organised with peaceful intent they often turned into mass riots and conflict between Catholic and Protestant civilians. ...read more.

A while before the hunger strikes were put into place members of the IRA in the jail went on a thing known as the 'Dirty Protest' this is were prisoners would cover the walls of there cell with their own excrement, though it caused extra work for the prison workers and made the jail generally filthy it did not have a large effect on the outside world. It did not bring much attention to the prisoner's situation and it was clear a larger demonstration would have to come to place to have a big enough impact to affect the outside world, the prisoners felt hunger strikes were the best way to achieve their goal. The leader of the very first hunger strikes was called Brendan Hughes, but he was not seen as a good leader at the time and made a vital mistake by calling the strike of when he thought the British Government would give in to their demands but they did not. So weeks after the first attempt at a hunger strike Bobby Sands took over as the leader and developed a plan were a new person would go on strike every week, this was so there would be roughly a death a week if the British Government did not give up to their demands, a death a week would have the ultimate shock factor on the public. Even when the hunger strikes began and Bobby Sands, who opted to be the first strikers, was about to die Margaret Thatcher refused to intervene, she did not want to admit to the situation in Northern Ireland as being a war and that meant not allowing the prisoners on strike to ...read more.

Throughout the first three years of the agreement, Unionists said the Government and major Nationalist parties were failing to live back up the rule for decommissioning of arms, as many paramilitaries such as the IRA were simply not handing over their guns. Moreover, Sinn Fein said the British Government did not demilitarise quickly enough, they stated they could not force anyone to give up arms and that the agreement only stated that the parties should use all their power to make paramilitary's give up their guns, they had discovered a bit of a loophole and arguments quickly started. Eventually after much debating a power sharing agreement has been signed recently in 2007 that the Republic and Northern Ireland are both happy to consent to, it took so long to come to a power sharing agreement that all parties are happy with because of all the complications along the way, a lot of these from the 'battles' Unionists and Nationalist have fort with one another down the years, this caused a lot of hate and prejudice between Catholics and Protestants which lead to events such as b****y Sunday and the hunger strikes that represented what the Irish people stood for at the time and there pure passion for what they believed in. All these events left such an aftermath that people would not consent to any peace agreements or power sharing until the situation had cooled down, we can only hope that the 2007 agreement brings peace to a troubled Northern Ireland and the civilians that live there. But will the peace last, and will all the political parties and paramilitaries be able to keep peace and settle down, we can only wait and see what the future holds for Northern Ireland. By Callum Newbury ...read more.