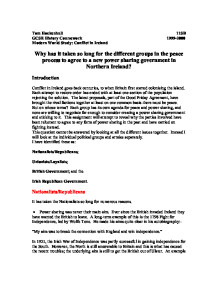 Why has it taken so long for the different groups in the peace process to agree to a new power sharing government in Northern Ireland?

Tom Hockenhull 11SB GCSE History Coursework 1999-2000 Modern World Study: Conflict in Ireland Why has it taken so long for the different groups in the peace process to agree to a new power sharing government in Northern Ireland? Introduction Conflict in Ireland goes back centuries, to when Britain first started colonising the island. Each attempt to restore order has ended with at least one section of the population rejecting the solution. The latest proposals, part of the Good Friday Agreement, have brought the rival factions together at least on one common basis-there must be peace. But on whose terms? Each group has its own agenda for peace and power sharing, and none are willing to negotiate far enough to consider creating a power sharing government and sticking to it. This assignment will attempt to reveal why the parties involved have been reluctant to agree to any form of power sharing in the past and have carried on fighting instead. This question cannot be answered by looking at all the different issues together. Instead I will look at the individual political groups and armies separately. I have identified these as: Nationalists/Republicans; Unionists/Loyalists; British Government; and the Irish Republican Government. Nationalists/Republicans It has taken the Nationalists so long for numerous reasons. * Power sharing was never their main aim. Ever since the British invaded Ireland they have wanted the British to leave. A long-term example of this is the 1798 Fight for Independence, led by Wolfe Tone. He made his aims quite clear in his autobiography:- "My aim was to break the connection with England and win independence." In 1921, the Irish War of Independence was partly successful in gaining independence for the South. However, the North is still answerable to Britain and this is what has caused the recent troubles; the underlying aim is still to get the British out of Ulster. An example of this is the 'Long War', which was started in 1969 and ended in 1994 (briefly re-igniting from 1996-1997). ...read more.

The UDR was over 97% Protestant. This shows that the Protestants basically had (until the RUC was disbanded) complete monopoly over the security forces in Northern Ireland. * The Loyalists do not trust the British or the Nationalists. They see their weapons as an important method of defence for the Protestant Community. This has important roots with William of Orange who they believe saved them from the Catholics. They kept, and may always keep, looking back to this victory and it may be what keeps them determined to fight. This is demonstrated in an early 1800s toast: "To the glorious memory of King William III, who saved us from slaves and slavery. Knaves and knavery, Popes and popery." Unionists also look back to 1912 when the UVF was able to quash the idea of home rule. This is demonstrated by a speech from Ian Paisley, made in 1981: "These men are ready to fight...They are prepared to defend their province in the same way as Lord Carson and the men of the Ulster Volunteer Force!" Ian Paisley was referring to 500 men parading from a private Protestant army. This shows that they have a very defensive attitude against the Catholics. Ian Paisley better demonstrates this defensive attitude in another statement in 1982: "If we cannot arrest the IRA and disarm them they are going to kill us. We have not the right but the duty to kill them before they kill me, my family and others. The ordinary Ulster man is not going to surrender to the IRA or be betrayed into a united Ireland or put his neck under the jackboot of popery." More recent examples of the Unionists defensive attitude is shown in a 1999 newspaper report about decommissioning: "Ulster Unionists three months ago rejected The Way Forward, the British and Irish governments' blueprint for immediate devolution with the IRA decommissioning to follow quickly afterwards, because they felt they were being asked to take all the risks." ...read more.

So, the IRA would need to disarm, yet as suggested by Kevin Toolis, 'victorious armies do not hand over their guns'. To solve this, they would have to be made to feel as if they had lost nothing. To do this, I think both sides would have to disarm at the same time, so neither feel threatened or betrayed. * The British would have to take a more balanced view rather than take sides. In the past, the British Government has always given in to the Unionists. For instance, the 1974 Ulster Workers Strike was designed to bring the North to a standstill in opposition to power sharing. The British Government gave in to the strikes and thus the idea of power sharing was destroyed. They would need to take more of a central stance. * The Unionists need to be less r****t in their approach and accept that the Nationalists have a right to share power in Ireland. An example of this racial hatred can be seen in a relatively modern Protestant fighting song: 'If guns are made for shooting, Then skulls are made to crack. You've never seen a better Taig Than with a bullet in his back.' Most importantly though, the factor which is at the root of all these problems can be defined as history. All the problems in Northern Ireland can be attributed to history, and the fact that people refuse to forget what has happened. Examples are: * IRA remember the victory of 1921 * Orangemen remember William III and his victory * Catholics remember Protestant forces, and their brutality. i.e: Black & Tans, 'B' Specials, RUC. * Unionists remember 1912 and Power Sharing The list could go on forever, because the truth is that everyone needs a historical event to base their opinions on. History cannot be changed, so the only way forward is to deal with what has happened in the past and try to get on with solving a future. As Nicholas Frayling, a writer for the Guardian suggested: "The way to deal with pain and resentment is to remember and change". ...read more.