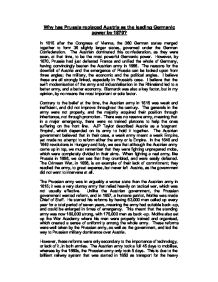 Why has Prussia replaced Austria as the leading Germanic power by 1870?

Why has Prussia replaced Austria as the leading Germanic power by 1870? In 1815 after the Congress of Vienna, the 360 German states merged together to form 38 slightly larger states, governed under the German Confederation. The Austrian dominated this confederation, as they were seen, at that time, to be the most powerful Germanic power. However, by 1870, Prussia had just defeated France and unified the whole of Germany, having convincingly beaten the Austrian army in 1866. The reasons for the downfall of Austria and the emergence of Prussia can be looked upon from three angles; the military, the economic and the political angles. I believe these are all strongly linked, especially in Prussia's case. I believe that the swift modernisation of the army and industrialisation in the Rhineland led to a better army, and a better economy. Bismarck was also a key factor, but in my opinion, by no means the most important or sole factor. Contrary to the belief at the time, the Austrian army in 1815 was weak and inefficient, and did not improve throughout the century. The generals in the army were not properly, and the majority acquired their position through inheritance, not through promotion. There was no reserve army, meaning that in a major emergency, there were no trained platoons to help the ones suffering on the front line. AJP Taylor described Austria as a 'stagnant Empire', which depended on its army to hold it together. The Austrian government believed that in their case, a weak army meant a weak Empire, yet made no attempt to reform either the army or is Empire. In the 1848 and 1849 revolutions in Hungary and Italy, we see that although the Austrian army came up in top, we must remember that they were fighting unprepared mobs, which were completely divided in their aims. When fighting a real army, like Prussia in 1866, we can see that they crumbled, and were easily defeated. ...read more.

By keeping them out of it, Prussia helped keep Austria as a 'stagnant kingdom', and so confirmed their position as an economic giant, and Austria's position as a struggling power. The conservative Austrian government and the lack of funds due to debt were the main reasons why Austria never started to industrialise. In 1865 Austria did try to join the Zollverein, but Prussia wisely kept them out, confirming their dominance. I believe that the growth of the Prussian economy was the main reason why they could become the leading Germanic power by 1870, just because of their total dominance. Both the Rhineland and the Zollverein provided Prussia with excellent resources that lead the way for mass railway production, which was vital for the transportation of soldiers when fighting Austria and France, but also helped modernise the army, as the steel made could be used to make the two new Prussian guns. The heavy industry meant that exports, and therefore the number of trade agreements increased, which also helped the economy. However, this exceptional economy also helped Bismarck and his contribution to German unification, as he had the ability to firstly spend money on whatever he needed, but also helped in get the upper hand over his enemies. If the Prussian army could mobilise in five days, and their enemies, namely Austria and France, took much longer, it would look as if they had been the aggressor, which would create a spirit of patriotism among the Germans, making Bismarck look like a hero. So the economy not only helped Prussia's military, but also its politics. This is almost reversed in Austria's case, as the political system and government completely stifled any chance of economic growth. Austria's government was slow and very inefficient, largely because it was conservative. Emperor Francis I's motto was 'rule and change nothing' and his successor, Ferdinand I, was much the same, as was the Prime Minister, Metternich. ...read more.

However, one cannot say he achieved this on his own, as he only came to power in 1862, and by that time industrialisation was in full swing, and the army had already started reforming. Clearly, Austria's government was too conservative; they were reactionary to any change, meaning they were constantly dealing with interior threats from nationalists. However, even after revolts, the government refused to change anything, and simply became more reactionary. This is the fundamental difference between the two governments; they were actually both conservative, but Ferdinand I was not prepared to change, whereas Wilhelm I was. His and his father's more liberal attitude meant that industrialisation could take place in the first place, and the fact that he gave Bismarck the freedom he wanted meant that Prussian dominance was becoming more apparent in the 1860s. Overall, it is clear that Prussia replaced Austria as the leading Germanic power through its dominance in the military, the economy, and politically, with the help of Bismarck. Wilhelm's more liberal attitude meant change, especially industrial change, could take place, which in turn helped the military with the construction of thousands of kilometres of railways. Moltke's reforms in the army also helped, as can be seen in the wars with both Austria and France. Although I do not believe he was the most important factor, Bismarck used this economic and military growth to his advantage politically, and in the end united the whole of Germany in 1870. I believe that the most important reason for Prussian dominance was their economic prosperity, due to the Rhineland and the Zollverein. Without this, the army would not have been able to mobilise as quick as they did and they would not have the same modern technology such as the 'needle-gun', and without the Zollverein, Bismarck would not have had something to show Prussian dominance over Austria to the German people, as well as the rest of Europe. ...read more.