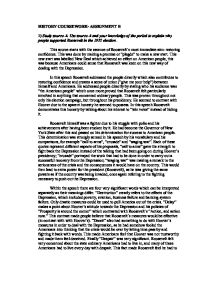 Why people supported Roosevelt in the 1932 election

HISTORY COURSEWORK- ASSIGNMENT B 1) Study source A. Use source A and your knowledge of the period to explain why people supported Roosevelt in the 1932 election. This source starts with the essence of Roosevelt�s most immediate aim: restoring confidence. This was done by making a promise or "plegde" to make a new start. This new start was labelled New Deal which achieved an effect on American people, this was because Americans could sense that Roosevelt was keen on this new way of dealing with the Depression. In this speech Roosevelt addressed the people directly which also contributes to restoring confidence and creates a sense of union ("give me your help") between himself and Americans. He addressed people directly by stating who his audience was "the American people" which once more proved that Roosevelt felt particularly involved in anything that concerned ordinary people. This was proven throughout not only his election campaign, but throughout his precidency. He seemed to contrast with Hoover due to the aparent honesty he seemed to possess. In this speech Roosevelt demonstrates this honesty by talking about his interest to "win votes" instead of hiding it. Roosevelt himself was a fighter due to his stuggle with polio and his achievements after having been stucken by it. He had become the Governor of New York State after this and passed on his determination for success to American people. This determination was strongly sensed in his speech by his vocabulary and his comparisons, for example "call to arms", "crusade" and "waging war". Each of these quotes represent different aspects of his proposals, "call to arms" gave the strength to fight back the Depression instead of the talking that had been going on during Hoover�s presidency; "crusade" portrayed the work that had to be done in order to carry out a successful recovery from the Depression; "waging war" was making a remark to the seriousness of the crisis and the consequences it would have on the country. ...read more.

On source B we can also find signs of public opinion at the time. This source refers to people's attitude after Roosevelt came into power in 1932 as with "hope and excitement". It also claims that people showed their opinion through their votes when it came down to voting a president in or out. In Roosevelt's case it was in several times in a row. This leaves us with no doubt about public opinion towards the New Deal as "all power is still in the hands of the people. They can vote out of power governments they do not like". Comparing source H with source I, we can see that source I covers a wider rage of issues: unemployment, recovery, eviction... Whilst source H only deals with eviction. Therefore I have reached the conclusion that source H, despite its limitations, is more useful as evidence of public opinion towards the New Deal. Source H not only covers broader issues, but it was a "popular song" and therefore can not be set up. But most important of all, it is from after the elections and therefore Americans had already says what they thought of the New Deal. 6) Study Sources J and K. why do you think these two people disagree about the New Deal? I think it is clear that these two people disagree about the New Deal because of their positions during the New Deal period. Whilst Source J is a speech from a "self-made businessman" speaking in 1980, Source K is an extract from Francis Perkins� book, "The Roosevelt I Knew" written in 1947. we can say that these two people are both `extremes� during Roosevelt's presidency. Businessmen were typically part of Roosevelt's opposition due to his increasing power and interference in individual issues, and Francis Perkins was a member of Roosevelt's government during the New Deal and therefore helped plan and carry out his policies. ...read more.

This scheme loaned money to over a million people in order to avoid them losing their homes. The second argument could be supported by Source G which is a cartoon representing the American economy as Uncle Sam being sick, Roosevelt as a doctor trying to cure his pacient and Congress being a nurse. The remedies used by this doctor seem to be mounting up without being very efficient in curing Uncle Sam. The remedies are the New Deal agencies and although there seem to be many of them, they are all half empty and no results are noticed. The final argument, is an eternal one. The everlasting fight between the few who are rich but powerful, and the vast majority who are ordinary people but have no power. Although the ones who opposed the New Deal were a small minority, they happened to be the most influential. The rich, Republicans and businessmen who believe in "rugged individualism" and "laissez faire" and are against governement interference, such as the one in the New Deal. However, there are millions who agree with this interference and they see it as necessary. In source J we are presented with the view of a "self-made businessman" who considered that the New Deal "hurt" them. Onthe other hand, Source K argues that Roosevelt "knew that the rich had been hard hit too, but at least they had something left." This source is from Roosevelt�s Secretary of Labour during the New Deal, so it cannot be considered as reliable. There is no single reason why there was so much disagreement over the New Deal. It was argued whether Roosevelt did make people more confident or whether he made people more dependant on the government for help. It was argued whether the New Deal was efficient enough or whether it spent too much money on unnecessary things. Big discussions were caused over whether the government interfered too much in the economy and with people's lives or finally, whether the war was overcome due to the fact that the war broke out, or the fact that the New Deal schemes were created. ...read more.