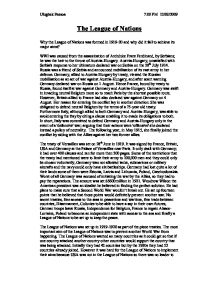 Why the League of Nations Failed?

The League of Nations Why the League of Nations was formed in 1919-20 and why did it fail to achieve its major aims? WWI was caused from the assassination of Archduke Franz Ferdinand, by Serbians; he was the heir to the throne of Austria-Hungary. Austria-Hungary, unsatisfied with Serbia's response to her ultimatum declared war on Serbia on the 28th July 1914. Russia was a friend of Serbia and announced mobilisation of its vast army in her defence. Germany, allied to Austria-Hungary by treaty, viewed the Russian mobilisation as an act of war against Austria-Hungary, and after scant warning Germany declared war on Russia on 1 August. Hence France, bound by treaty to Russia, found itself at war against Germany and Austria-Hungary. Germany was swift in invading neutral Belgium more so to reach Paris by the shortest possible route. However, Britain allied to France had also declared war against Germany on 4 August. Her reason for entering the conflict lay in another direction: She was obligated to defend neutral Belgium by the terms of a 75-year old treaty. Furthermore Italy, although allied to both Germany and Austria-Hungary, was able to avoid entering the fray by citing a clause enabling it to evade its obligations to both. ...read more.

One of the most important things about the council is that every member had the power of veto, which means that if one member said veto about a certain idea or plan then one vote against all could stop action being agreed. The secretariat was just like secretaries and their job was to keep records of meetings and prepared reports. The permanent Court of International Justice This was meant to help to settle disputes peacefully. In 1929 economic disaster struck, there was a disastrous collapse of the New York Stock Exchange (Wall Street Crash). It had happened because the USA was one of the wealthiest countries in that time, all other countries like Britain, France, Germany most of the Europe were borrowing money from the USA to restore themselves and when the Wall Street Crash happened USA wanted their money back but no one could really give the money back. As all that happened the world's trade had went down all countries raised their taxes up as much as they could to protect their own industries. So USA did that to Japan. Japanese industrial production and employment fell by 30% between 1929 and 1931 in other words there was a huge number of unemployment and starvation. ...read more.

what had happened with Abyssinia, they have been attacked, and the rule was to protect any country that is threatened with a war did not happen. All this work behind The League of Nations back was of course one of the failures of the League of Nations because then no one really had any hope for the League like weaker as in power countries didn't really have any trust in the League since what happened with the province in China and Abyssinia. So no one really took the League of Nations seriously because their answers and conclusions took way too long to decide, like what happened with China and that commission. There was no real Leader, no-one too influential and controlling, like USA or Russia. Another reason is that the League did not meet often so they could not really discuss very important issues like Manchuria and Japan or Italy and Abyssinia. Counties left so the League was getting weaker and weaker because Japan which was one of the powerful countries left and no one could do anything about it. So these are the reasons why the League of Nations did not success in its aims and failed. ?? ?? ?? ?? Ulugbek Pessoa 7:00 PM 12/03/2009 ...read more.