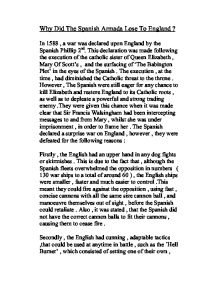 Why the Spanish Armada lost.

Why Did The Spanish Armada Lose To England ? In 1588 , a war was declared upon England by the Spanish Phillip 2nd. This declaration was made following the execution of the catholic sister of Queen Elizabeth , Mary Of Scott's , and the surfacing of 'The Babington Plot' in the eyes of the Spanish . The execution , at the time , had diminished the Catholic threat to the throne . However , The Spanish were still eager for any chance to kill Elizabeth and restore England to its Catholic roots , as well as to depleate a powerful and strong trading enemy .They were given this chance when it was made clear that Sir Francis Walsingham had been intercepting messages to and from Mary , whilst she was under imprisonment , in order to frame her . ...read more.

Secondly , the English had cunning , adaptable tactics ,that could be used at anytime in battle , such as the `Hell Burner' , which consisted of setting one of their own , worthless , ships alight and setting its course among the Spanish borders . This strategy was used to force the opposition to retreat under the threat of fire to their own ships . Thirdly , The Spanish did not believe that Elizabeth could conjure a strong enough fleet , under the time given , to match their own . Therefore , they came unprepared and ill equipped , for the fight England upheld . Their big , slow ways of damage were little match for the fast , agile cannons and weaponry England had equipped . ...read more.

During the speech , she stated 'I know I have but the body of a weak and feeble woman ; but I have the heart and stomach of a king , and of a loyal king too....' , The speech was very powerful and inspired the sailors to believe that they could reign victorious , despite the overwhelming odds . In conclusion, and in consideration of the above , the single most significant factor contributing to the defeat of the Spanish Armada , was their far less sophisticated fleet of ships , which were by far inferior to the English . They were larger , heavier , difficult to manoeuvre and unable to respond , with any speed , to the strategic tactics employed by the English fleet . ?? ?? ?? ?? ...read more.