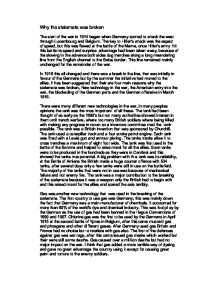 Why The Stalemate Broke

Why the stalemate was broken The start of the war in 1914 began when Germany started to attack the west through Luxembourg and Belgium. The key to Hitler's attack was the aspect of speed, but this was flawed at the battle of the Marne, once Hitler's army hit this battle its speed and surprise advantage had been taken away, because of the slowing in the advance both sides dug trenches along a long meandering line from the English channel to the Swiss border. This line remained mainly unchanged for the remainder of the war. In 1918 this all changed and there was a break in the line, that was initially in favour of the Germans but by the summer the initiative had moved to the allies. It has been suggested that their are four main reasons why the stalemate was broken, New technology in the war, the American entry into the war, the blockading of the German ports and the German offensive in March 1918. There were many different new technologies in the war, in many peoples opinions the tank was the most important of all these. The tank had been thought of as early as the 1890's but not many authorities showed interest in them until trench warfare, where too many British soldiers where being killed with making any progress in return so a inventors committee mad the tank possible. ...read more.

Planes quickly took on the role collecting intelligence on enemy positions and bombing enemy supplies. Bomber planes were much bigger than fighter planes so were an easy target to fighters. Observer planes now started to take fighters as protection on its missions. Next to enter the war in the way of aviation was the Germans with Zeppelin's. These were to take out bombings on British city's to lower moral at home and let them know they are not safe in their own homes. Another part of war aviation was balloons which had two men in that observed enemy positions but the size of balloons made them an easy target. I think that aviation made a contribution to keeping the western front in stalemate because it gave away enemy positions regularly which helped each side become aware of what its enemy was doing. New technology did contribute to the breaking of the stalemate on the western front especially the tank, this new invention was never used before in war and helped the British get a great upper hand on Germany but it did not help to make the winning tactics that helped the German break stalemate. Another of the four points that helped break the stalemate was the entry of America into the war. ...read more.

The storm troopers were moving that fast that the supplies could not keep up with them so they were ill equipped and dieing of starvation. This was a major factor in the breaking of the stalemate which started out bad for the allies but ended up playing to their advantage. In conclusion I think that the German offensive was the most important aspect in breaking stalemate in 1918. I think this because this was the major attack on the western front that helped both side at certain times and helped either side to play to their advantage and to use their resources best. Once the German attack had penetrated the western front it allowed for the German army to pass either side of the line an flank their enemy, but also when the Germans broke through the line they covered too much ground too quickly which did not help in getting supplies to the German soldiers. I think that if all four aspects had not talked place the outcome of the war may not have been as drastic or maybe not even the same. If the British did not blockade the ports America would not have joined the war, the Germans would have supplies and they would be a lot more efficient and ready to fight. Overall I think that for the outcome that took place it needed a combination of all four of the different parts to break the stalemate. ...read more.