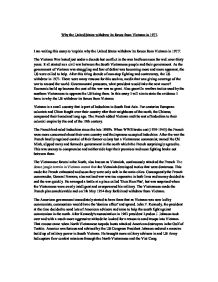 Why the United States withdrew its forces from Vietnam in 1973

The French added Vietnam and the rest of Indochina to their colonial empire by the end of the 19th century. The French had ruled Indochina since the late 1800's. When WWII broke out (1939-1945) the French were more concerned about their own country and the Japanese occupied Indochina. After the war the French hastily regained control of their former colony but a Vietnamese communist, named Ho Chi Minh, slipped away and formed a government in the north which the French surprisingly agreed to. This was uneasy to compromise and neither side kept their promises and soon fighting broke out between them. The Vietnamese forces in the North, also known as Vietminh, continuously attacked the French. ...read more.

The American government immediately started to have fears that as Vietnam was now led by communists, communism would have the 'domino effect' and spread. John F. Kennedy, the president at the time decided to send lots of American advisers and arms to help the south fight against communism in the north. After Kennedy's assassination in 1963 president Lyndon J. Johnson took over and with a much more aggressive attitude he looked for a reason to send troops into Vietnam. That excuse came when North Vietnamese torpedo boats attacked American destroyers in the Gulf of Tonkin. America was furious and advised by the US Congress President Johnson ordered a massive build up of military power in South Vietnam. He brought more military advisers in and US Army helicopters flew combat missions through the North Vietnamese and the Viet Cong. ?? ?? ?? ?? ...read more.