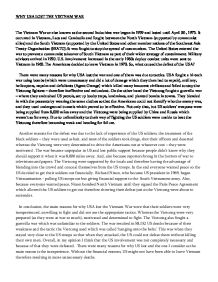 Why the USA lost the Vietnam war.

WHY USA LOST THE VIETNAM WAR The Vietnam War or else known as the second Indochina war began in 1959 and lasted until April 30, 1975. It occurred in Vietnam, Laos and Cambodia and fought between the North Vietnam (supported by communist allies) and the South Vietnam (supported by the United States and other member nations of the Southeast Asia Treaty Organization (SEATO). It was fought to stop the spread of communism. The United States entered the war to prevent a communist takeover of South Vietnam as part of their wider strategy of containment. Military advisors arrived in 1950. U.S. involvement increased in the early 1960s deploy combat units were sent to Vietnam in 1965.The Americans decided to leave Vietnam in 1973. ...read more.

Not only that, but US soldiers' weapons were being supplied from 8,000 miles away and the Vietcong were being supplied by China and Russia which weren't so far away. Due to unfamiliarity to their way of fighting the US soldiers were unable to beat the Vietcong therefore becoming weak and heading for failure. Another reasons for the defeat was due to the lack of experience of the US soldiers, the treatment of the black soldiers - they were used as bait, and most of the soldiers took drugs, shot their officers and deserted whereas the Vietcong were very determined to drive the Americans out at whatever cost - they were motivated . The war became unpopular in US and lost public support because people didn't know why they should support it when it was 8,000 miles away. ...read more.

Whereas the Vietcong were very prepared (as they were at war so much), motivated and determined to fight. The Vietcong also fought a guerrilla war which was unfamiliar to the soldiers. The war resulted in 58,152 US deaths because of their weakness and the tactic the Vietcong used which was called 'hanging onto the belts'. This was when they stayed very close to the US troops so that when they attacked, the US could not defeat them without killing their own men. Overall, in my opinion I think that the US involvement was not completely necessary and because of that they were defeated. There were many reasons for why US lost and the one I consider as the main reason is the inexperience. Without the financial reasons, US might not have been able to leave Vietnam therefore resulting in more unnecessary deaths. ...read more.