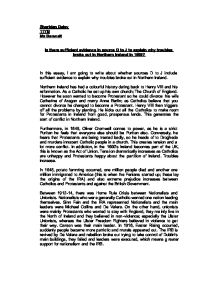 Why Trouble Broke Out In Nothern Ireland In 1969

Sheridan Daley 11YB Ms Banwait Is there sufficient evidence in source D to J to explain why troubles broke out in Northern Ireland in 1969? In this essay, I am going to write about whether sources D to J include sufficient evidence to explain why troubles broke out in Northern Ireland. Northern Ireland has had a colourful history dating back to Henry VIII and his reformation. As a Catholic he set up his own church; The Church of England. However he soon wanted to become Protestant so he could divorce his wife Catherine of Aragon and marry Anne Berlin; as Catholics believe that you cannot divorce he changed to become a Protestant. Henry VIII then triggers off all the problems by planting. He kicks out all the Catholics to make room for Protestants in Ireland from good, prosperous lands. This generates the start of conflict in Northern Ireland. Furthermore, in 1649, Oliver Cromwell comes to power, as he is a strict Puritan he feels that everyone else should be Puritan also. Conversely, he hears that Protestants are being treated badly, so he heads of to Drogheda and murders innocent Catholic people in a church. This creates tension and a lot more conflict. In addiction, in the 1800's Ireland becomes part of the UK, this is known as the Act of Union. Tension dramatically increases as Catholics are unhappy and Protestants happy about the partition of Ireland. ...read more.

The source uses a stereotypical Irish girls name; Erin and it seems to be that the Catholic priest is telling Ireland off for being protestant. The source is a negative Catholic propaganda and it also shows Ireland and Protestants being prisoner of the Catholics. The source does not show however, that the Protestants were planted in Ireland and took good Catholic land. It could be suggested that the intended audience is Irish people, especially those of Catholicism. I feel that the source is not very reliable because it appears to be one sided to the Catholics dominating over the Protestants. Furthermore, publishing the cartoon would definitely create more tension because Protestants would feel angry that it suggests that Catholics have more power over them. This would create a long term cause into why troubles broke out. A catholic looking at the cartoon I feel would be proud that there religion is rising above Protestants and they have a hold over Protestants. In addition, in source F, a map is showing the Gerrymander in Derry in 1966. The source shows that roughly 2/3 of the population were Catholics and they refused boundary commissioners for they were being stubborn and passive resistance. However, in my opinion, I believe that I would be a good idea for the Catholics to become boundary commissioners and that Gerrymander would be a fair situation. I think that the source is reliable because it is based on fact not opinion. ...read more.

I don't think the source is reliable because it does not show what happened before and after the picture. It also doesn't show or say who took the picture and why. Source I could not be either fact or opinion because the photograph may be staged, so the source is not reliable. I think this source is not sufficient enough to explain why troubles broke out in 1969, but shows the level of tension between the different groups and how a peaceful march could turn violent and the extent of tension by 1916. Finally, I believe that sources D to I do not show enough sufficient evidence to explain why troubles broke out in Northern Ireland in 1969. I believe this because many of the sources raise more questions rather than they answer. For instance, source I raises questions to audiences into what made the march turn violent. Furthermore, many of the sources are one sided; sources D and G prove how school children are taught about the major divide between Catholics and Protestants by issuing photo's, pictures, text about the other religion in a negative way in school text books. Together, the sources give the reader a slight understanding into why troubles broke out in 1969, but they do not give a sufficient amount for the reader to fully understand why troubles did break out. As Northern Ireland has had a colourful history, dating back to 1649, I consider that six sources would not be able to explain in great detail the full consequences into why troubles broke out in 1969; as Northern Ireland's history is far too complex. ...read more.