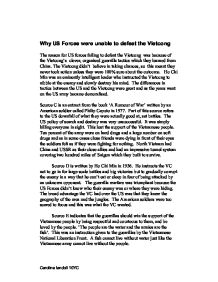 Why US Forces were unable to defeat the Vietcong

Why US Forces were unable to defeat the Vietcong The reason for US forces failing to defeat the Vietcong was because of the Vietcong's clever, organised guerrilla tactics which they learned from China. The Vietcong didn't believe in taking chances, so this meant they never took action unless they were 100% sure about the outcome. Ho Chi Min was an eminently intelligent leader who instructed the Vietcong to nibble at the enemy and slowly destroy his mind. The differences in tactics between the US and the Vietcong were great and as the years went on the US army became demoralised. Source C is an extract from the book 'A Rumour of War' written by an American soldier called Philip Caputo in 1977. ...read more.

Source D is written by Ho Chi Min in 1956. He instructs the VC not to go in for large scale battles and big victories but to gradually corrupt the enemy in a way that he can't eat or sleep in fear of being attacked by an unknown opponent. The guerrilla warfare was triumphant because the US Forces didn't know who their enemy was or where they were hiding. The broad advantage the VC had over the US was that they knew the geography of the area and the jungles. The American soldiers were too scared to focus and this was what the VC wanted. ...read more.

Most of the US army were an average age of nineteen, they were inexperienced, and most of them had low IQs. In source D and E are both showing the cunning of the Vietcong and how they infiltrated the people and the country. The sources are both instructions given to the Vietcong which shows that they had rules to follow whereas the Americans were demoralised. The two sources demonstrate a strong sense of organisation. The Vietcong's tactics were as shown in source D orderly and confident, but the US Forces were pressured to produce corpses and from the evidence in source C, they didn't win the support of the people because of the incident at 'My Lai'. The 'Search and Destroy' tactics were not superior. I can tell that the significance of the war was irrevocable. Caroline Iandoli 10YC ...read more.