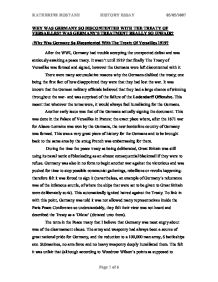 WHY WAS GERMANY SO DISCONTENTED WITH THE TREATY OF VERSAILLES

WHY WAS GERMANY SO DISCONTENTED WITH THE TREATY OF VERSAILLES? WAS GERMANY'S TREATMENT REALLY SO UNFAIR? -Why Was Germany So Discontented With The Treaty Of Versailles 1919? After the WWI, Germany had trouble accepting the unexpected defeat and was anxiously awaiting a peace treaty. It wasn't until 1919 that finally The Treaty of Versailles was formed and signed, however the Germans were left discontented with it. There were many accumulative reasons why the Germans disliked the treaty; one being the first fact of how disappointed they were that they had lost the war. It was known that the German military officials believed that they had a large chance of winning throughout the war- and was surprised of the failure of the Ludendorff Offensive. This meant that whatever the terms were, it would always feel humiliating for the Germans. Another early issue was that of the Germans actually signing the document. This was done in the Palace of Versailles in France: the exact place where, after the 1871 war for Alsace-Lorraine was won by the Germans, the new borderline country of Germany was formed. This was a very great piece of history for the Germans and to be brought back to the same area by the smug French was embarrassing for them. ...read more.

Still, another nationally hated term of the Treaty was that of the reparations. The sum �6.6 billion was decided slightly after the actual Treaty, and was told to be paid in gold, coal and ships (etc) as well as cash. The Germans believed this sum was over-estimated and was impossible to pay. The country suffered from huge economic recession and without its industry and resources for trading, it had no obvious source of income. The whole country was over wrought by unemployment, starvation and general poverty. The Germans have always disagreed profusely over the reparations and felt that they were being exploited massively. As we can see, the general German public despised the Treaty of the Versailles as it came to affect them in an unforgivable way. Many understandable factors caused many effects (to name: the French invasion of the Ruhr after a missed reparation deadline, the economic recession and Hitler's rise to power then onto World War II) that can be clearly pinpointed as stemming from the Treaty of Versailles. However many argue that despite Germany's arguing, the Treaty was actually very fair. -Was Germany's Treatment Really So Unfair? ...read more.

These are certain knock-on affects that hint that maybe certain parts of the Treaty were not fool-proof. Yet, the truth of the matter was that Germany in the end paid very little of the �6.6 billion. We can see there were no easy solutions and that this controversial issue could be argued for a long time. There is a quote that I believe is very true of this situation, it is by W. Carr, a historian who wrote: "Severe as the Treaty of Versailles seemed to many Germans, it should be remembered that Germany might easily have fared worse." I also think that at the time it may have seemed irrational and we know -from the benefit of hindsight- that it was a huge contributor to World War II. The collection of all terms spurred revenge inside most Germans but I believe that actions they did just before the end of the war were severely unjust and require a certain degree of punishment. Overall, the Treaty of Versailles was fair in itself but the uncalculated knock-on affects that stemmed from it has weakened its case. ?? ?? ?? ?? KATHERINE ROSTAMI HISTORY ESSAY 05/05/2007 Page 4 of 6 ...read more.