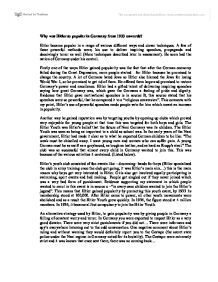 Why was Hitler so popular in Germany from 1933 onwards? Hitler became popular in a range of various different ways and clever techniques. A few of these powerful methods were; his use to deliver inspiring speeches, propaganda and deceivingly terror as well (More techniques described later in assessment). He soon had the nation of Germany under his control. Firstly one of the ways Hitler gained popularity was the fact that after the German economy failed during the Great Depression, more people started for Hitler because he promised to change the country. A lot of Germans hated Jews so Hitler also blamed the Jews for losing World War 1, so he promised to get rid of them. He offered them hope and promised to restore Germany's power and excellence. Hitler had a gifted talent of delivering inspiring speeches saying how great Germany was, which gave the Germans a feeling of pride and dignity. Evidence that Hitler gave motivational speeches is in source B, this source stated that his speeches were so powerful, that he compared it to a "religious conversion". ...read more.

In 1936, the figure stood at 4 million members. In 1936, it became all but compulsory to join the Hitler Youth. An alternative strategy used by Hitler, to gain popularity was by giving people in Germany a felling of constant worry and terror. In Germany you were expected to respect Hitler as a very good dictator. There were very strict punishments if you did not... There were informers and spy's everywhere listening out to the odd conversation. One negative comment about Hitler's ruling and without warning they would definitely report you to the Gestapo (the secret state police under the n**i regime in Germany noted for its brutality). The Gestapo were extremely strict and it was known that once sent there, there was no coming back... By the time people started getting sent to the Gestapo, fear was among the citizens of Germany no one could express there own opinions- a spy could be writing about it the second they said it. You could trust nobody - even your closes friends. You just had to go along with Hitler's reign and that was that. ...read more.

Almost everywhere in Germany you went, there was at least a poster; if you never saw Hitler on a poster you would probably hear him on a loud speaker. Posters highlighted the Nazis achievements and strength, and to criticise and show contempt with the Jewish community. In roughly every caf� there was a loud speaker to guarantee you could hear Hitler speak. Joseph Goebbels assured that people in Germany, respected Hitler very well and the best way to do it was to influence Germany with a lot of propaganda. Children grew up thinking that Hitler was the greatest from all the clubs, books and posters ECT. Hitler gained a lot of popularity via propaganda. Hitler was a very clever man; he used stragedys to make his popularity grow tremendously, from having a few hundred people supporting him to just about the whole of Germany. It was the perfect time to use propaganda and offer hope to the citizens of Germany. Germany had just failed economically and politically just after the great depression(from world war 1) and were eager to rise back to power. Hitler took that opportunity and formed many followers. Hitler had Germany under his control... ?? ?? ?? ?? ...read more.

Sets out a clear introduction, explaining what they see as the most important reasons why Hitler became popular, this is a good thing to do as it gives your essay direction. Also as the essay was a source based essay, ...

Sets out a clear introduction, explaining what they see as the most important reasons why Hitler became popular, this is a good thing to do as it gives your essay direction. Also as the essay was a source based essay, the author was right to refer to the source and use it to prove some of the statement they made with their knowledge. I would have referred to the sources a lot more, as these sorts of question are all about interpreting the source and seeing if they back each other up, which the author to some extent fails to do. The author shows off great knowledge, specifically about the Hitler Youth, knowledge is very important in all history essays, but the author used it particularly well, as he used his knowledge to supplement the source, for instance highlighting that the Hitler Youth had been very popular and then used the source which backed it up. In this essay I would have talked about the impact of the Treaty of Versailles and negative correlation, where Hitler made sure he opposed all the things in society that the majority disliked, like the Jews and the politicians (who were still tainted with the Ã¢â‚¬Ëœstab in the backÃ¢â‚¬â„¢ myth, concerning the end of the war.)

The author analyses the sources fairly well as they use them to back up points theyÃ¢â‚¬â„¢ve made. However the author does not look at the trustworthiness of each source, or look to see if there were any contradictions, if the author had done this he would have received four stars, as looking at the sources in this depth is very good, as it shows off your analytical skills. An example of this would be looking at a source, written by Goebbels, which said wonderful things about Hitler, and saying that it was unreliable as Goebbels job was to promote Hitler, so may have a certain amount of bias in the source.

The spelling and grammar in this essay is poor and this did contribute to the lowering of the star rating. The spelling could be typos and if that is the case then they can be avoided by checking what you write at the end of the essay, for instance when I write essays, I always put aside a few minutes at the end to check for mistakes. The author was also lazy, notice when he lists the forms of propaganda Ã¢â‚¬Ëœin music, films, newspapers ECT,Ã¢â‚¬â„¢ never write etc, as it looks lazy or worse suggests that you donÃ¢â‚¬â„¢t know what else to put, if itÃ¢â‚¬â„¢s the latter reason just finish the list or write Ã¢â‚¬Ëœand other pieces of communication.Ã¢â‚¬â„¢ If it looks lazy, it is likely to be marked down, so where ever possible find suitable ends to sentences or lists. This essay received three stars as it demonstrated good knowledge and fair use of the source, it would have got a higher mark, if spelling and grammar had been better and if the sources had been looked into in greater depth.