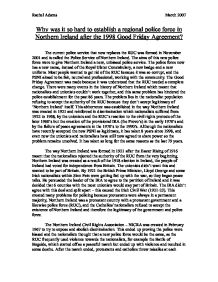 Why was it so hard to establish a regional police force in Northern Ireland after the 1998 Good Friday Agreement?

Why was it so hard to establish a regional police force in Northern Ireland after the 1998 Good Friday Agreement? The current police service that now replaces the RUC was formed in November 2001 and is called the Police Service of Northern Ireland. The aims of this new police force were to give Northern Ireland a new, unbiased police service. The police force now has a new name, instead of the Royal Ulster Constabulary, a new badge and a new uniform. Most people wanted to get rid of the RUC because it was so corrupt, and the PSNI aimed to be fair, neutral and professional, working with the community. The Good Friday Agreement was made because it was understood that the RUC needed a complete change. There were many events in the history of Northern Ireland which meant that nationalists and unionists couldn't work together, and this same problem has hindered the police establishment for the past 86 years. The problem lies in the nationalist population refusing to accept the authority of the RUC because they don't accept legitimacy of 'Northern Ireland' itself. This abhorrence was established in the way Northern Ireland was created in 1921 and reinforced in discrimination which nationalists suffered from ...read more.

This was again, a peaceful march until the marchers were attacked by a loyalist mob, using bricks and bottles as weapons. The RUC were not protecting the nationalists in any way so the British Army were sent. This deeply angered the nationalists as the British Army again showed a biased control. This adds to reasons why the nationalists opposed the new police force and why it was so hard to establish it. The army was introduced in to help but instead this angered the nationalists even more and their lack of support and harsh feelings towards the RUC were made even stronger. The discrimination had not stopped and this was proved by events such as b****y Sunday, Internment and Falls Road. This all gave the RUC a bad name and made the conflict much worse than it already was. b****y Sunday caused positive propaganda for the nationalists (republicans), stones were thrown at youths at a Civil Rights protest march, and the soldiers were shooting the marchers. The army were not even punished or shamed for their actions, they were excused and the IRA was blamed. Therefore support for the IRA grew stronger and by supporting the IRA, nationalists felt like they were defending their cause. ...read more.

and an enquiry into the events of b****y Sunday. In return for this, the IRA and Sinn Fein have to give up violence forever (decommission their arms) and end the feud. The reason this deal took so long to work was because Sinn Fein refused to give up violence or their weapons, but the unionists wouldn't share power with them until they gave up violence, so it was a vicious circle - neither the nationalists nor the unionists would agree. Part of the Good Friday Agreement was the Patten Commission, a report which was a promise to look into the reform of the RUC and the creation of the new PSNI. The aims for the new PSNI would be different and unbiased. The system would be evaluated frequently to protect human rights. The unionists wanted the RUC to remain because they trusted them and were worried that RUC police officers who had died protecting them would be forgotten due to the name change. To add to this, nationalists were fed up with the RUC's biased control over them and didn't want to work with the unionists and refused to trust the policing system because they thought they would still be ruled by the British Government and would therefore be further away from achieving a United Ireland. ?? ?? ?? ?? Rachel Adams March 2007 ...read more.