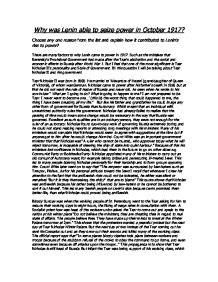 Why was Lenin able to seize power in October 1917?

Why was Lenin able to seize power in October 1917? Choose any one reason from the list and explain how it contributed to Lenin's rise to power? There are many factors to why Lenin came to power in 1917. Such as the mistakes that Kerensky's Provisional Government had made after the Tsar's abdication and the social and economic effects to Russia after World War 1. But I feel that one of the most significant is Tsar Nicholas II's personality and Style of Government. IN this question I will be talking about Tsar Nicholas II and his government. Tsar Nicholas II was born in 1868. He married to 'Alexandra of Hesse' (granddaughter of Queen of Victoria), of whom was German. Nicholas came to power after his father's death in 1896 but at first he did not want the role of leader of Russia and never did. As seen when he wrote to his son-in-law " What am I going to do? What is going to happen to me? I am not prepared to be Tsar. I never want to become one...' (this is) the worst thing that could happened to me, the thing I have been dreading all my life." But like his father and grandfather he could image any other form of government for Russia than Autocracy. Which meant that an individual with unrestricted authority rules the government. Nicholas had already failed to realize that the passing of time would mean some change would be necessary in the way that Russia was governed. Excellent as such qualities are in an ordinary person, they were not enough for the ruler of an autocracy. Nicholas found day-to-day work of governing Russia extremely boring and he could not stand reading reports or attending long meetings with his ministers. Many of his ministers would complain that Nicholas would seem to agree with suggestions at the time but if anyone got to him after he would change his mind. ...read more.

Then all I want is sleep, sleep forever on your shoulder, in your embrace..." you can see why people grew to dislike him. Stolypin ordered the Okhrana to watch Rasputin to protect the Tsar. But while he was collecting evidence to discredit Rasputin, a police informer of the Okhrana shot Stolypin during an opera performance in September 1911. Rasputin and Alexandra's relationship was still going on behind the Tsar's back but everyone knew except the Tsar himself. After the death of Stolypin, the First World War started. Russia had five million men in their army. This was bigger than Germany's and Austria-Hungary put together. But the problem was that the soldiers were underfed, had no weapons and no boots. By December 1914 the army had over a million men dead. The situation got worse with defeats in 1915. The Russian army was on the verge of collapse. So Nicholas decided to take personal command of the army. This was a fatal mistake for several reasons. To begin with he was not a good commander, his people would blame him personally for failure. Finally he left the Tsarina and Rasputin in full command of Russia back in St. Petersburg. The people did not trust the Tsarina because she was German and Rasputin was seen as an evil influence on government. The Tsarina made many bad decisions, which Rasputin had put he up to. Such as dismissing ministers replacing them with hopeless ones. In December 1916, some aristocrats murdered Rasputin, but the damage had already been done. Economic chaos at and the military disaster in the war had spelt end for the Tsarist regime. Lenin knew this and was able to increase his party popularity all he needed was a revolution to happen. Finally the Revolution was triggered by cold weather, St. Petersburg and 340,000 soldiers protected the Tsarina. They were stationed in overcrowd barracks in and around the city. ...read more.

Combined this with the devastation and desperation brought on shortly by World War 1, the Russian public lost confidence in the Tsar and his Government. This lead to political groups being formed against the Tsar and each one did not get on with another. Liberal constitutionalists wanted to remove the Tsar and form a republic; the Social revolution tried to promote a peasant revolution. The Marxists promoted a revolution among the proletariat or urban working class. The Russian public was fed up with their Government's state of affairs and ready for change. This Change was presented in the form of Lenin. Lenin was a superb speaker; he would hold audiences at rapt attention with his powerful speeches. People became convinced of his socialist views. Lenin formed his own party, they were called the Bolsheviks and unlike the other parties Lenin limited membership to a small number of full-time revolutionaries. During World War 1 Tsar Nicholas II remained totally focus on winning the war and did not hesitate before committing more men and supplies to the War effort. But the Russian public was already losing faith in him. They were starving of hunger because trains that supplied food could not deliver food to the peasants at war and in inner cities. While this was all going on Lenin was making his way up; he was getting more people on his side. Finally the Russian public and his army went against him and the Tsar had to abdicate the throne in February of 1917. He left a weak government behind, which was run by Soviet Councils. Their leader was Alexandra Kerensky. The government was called the Provisional Government, and they failed to make deadlines and lost a lot of support. In November Kerensky asked Lenin and his Bolsheviks, with help on arming Petrograd. Lenin used this to overthrown the Provisional Government in October 1917. I feel that without the Tsar abdicating that Lenin would not of been able to seize power from the Provisional Government and the Kornilov Affair. Without the Tsar Nicholas abdicating none of the Revolutions would have been able to happen. ...read more.