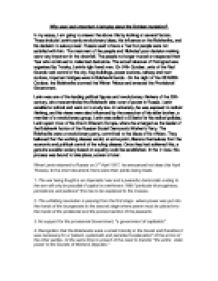 Why was Lenin important in bringing about the October revolution?

Why was Lenin important in bringing about the October revolution? In my essay, I am going to answer the above title by looking at several factors. These include Lenin's early revolutionary ideas, his influence on the Bolsheviks, and his decision to seize power. Russia used to have a Tsar but people were not satisfied with him. The treatment of the people and Nicholas' poor decision making were very important in the downfall. The people no longer trusted or respected their Tsar who continued to make bad decisions. The actual takeover of Petrograd was organised by Trotsky, Lenin's right hand man. On 24th October, units of the Red Guards took control of the city. Key buildings, power stations, railway and tram stations, important bridges were in Bolshevik hands. On the night of the 25th/26th October, the Bolsheviks stormed the Winter Palace and arrested the Provisional Government. Lenin was one of the leading political figures and revolutionary thinkers of the 20th century, who masterminded the Bolshevik take-over of power in Russia. ...read more.

At the same time to preach of the need to transfer "the entire state power to the Soviets of Workers Deputies." 5. Not a parliamentary republic but a republic of Soviets of Workers', Agricultural Labourers' and Peasants' Deputies. No standing army but an armed people. Elected officials subject to recall and paid the same as a competent worker. 6. Confiscation of all landed estates and nationalisation of all lands in the country. 7. Banks to be amalgamated into a single bank under the control of the Soviet of Workers' Deputies. 8. Social production and distribution of products under the control of the Soviets. 9. Convocation of a Party Congress. Change Party programme on the imperialist war, the state and the minimum programme. Change of name to Communist Party. 10. A new International. These ten points laid the basis for the October Revolution which would not have been successful without the leadership of Lenin. They confirmed the inability of capitalism to take society forward and therefore the need to move to the stage of the proletarian revolution. ...read more.

This enabled the Bolsheviks to start taking control. Realising another chance had came, Lenin wrote to his comrades, telling them to organise a second revolution. In conclusion, I believe that Lenin was absolutely vital to the October revolution because it was Lenin who won that struggle, who secured the Russian Revolution as a people's revolution. His leadership during that year - his propaganda in Pravda and it was the Bolsheviks who defeated Kornilov in August and took over Petrograd Soviet in September, the Bolsheviks became more and more popular and then in November they organised a mass uprising - which established it as a true popular revolution. On the other hand, Lenin was the leader - he got to make the speech announcing the new government on 8 November - but it was Trotsky who did the work. It was Trotsky who ran the Red Guards who defeated Kornilov - Trotsky who took over the Petrograd Soviet by becoming Chairman - Trotsky who persuaded Lenin to mount the November revolution, and then who organised the Red Guards who won it. ...read more.