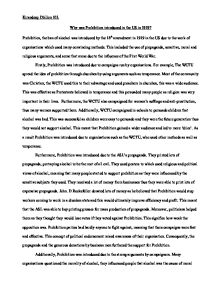 Why was Prohibition introduced in the US in 1919?

Kirandeep Dhillon 10L Why was Prohibition introduced in the US in 1919? Prohibition, the ban of alcohol was introduced by the 18th amendment in 1919 in the US due to the work of organisations which used many convincing methods. This included the use of propaganda, sensitive, moral and religious arguments, and some that arose due to the influence of the First World War. Firstly, Prohibition was introduced due to campaigns run by organisations. For example, The WCTU spread the idea of prohibition through churches by using arguments such as temperance. Most of the community was Christian; the WCTU used this to their advantage and used preachers in churches, this was a wide audience. This was effective as Protestants believed in temperance and this persuaded many people as religion was very important in their lives. Furthermore, the WCTU also campaigned for women's suffrage and anti-prostitution, thus many women supported them. ...read more.

This meant that the ASL was able to buy printing presses for mass production of propaganda. Moreover, politicians helped them as they thought they would lose votes if they voted against Prohibition. This signifies how weak the opposition was. Prohibition parties had hardly anyone to fight against, meaning that there campaigns were fast and effective. This concept of political endorsement raised awareness of their organisation. Consequently, the propaganda and the generous donations by business men furthered the support for Prohibition. Additionally, Prohibition was introduced due to the strong arguments by campaigners. Many organisations questioned the morality of alcohol; they influenced people that alcohol was the cause of moral problems such as crime and s****l assaults which furthered the idea of alcohol being the root of all evil. Furthermore, they used medical facts which helped as people didn't want to take risks with alcohol as it caused heart and liver failure. ...read more.

Also, they claimed that soldiers couldn't fire straight under the influence of alcohol and this jeopardised the success of the US in the war. Furthermore, they also questioned the patriotism of America as they claimed some of the beer brewers were German, the enemy in the war, so this was considered 'un-patriotic'. This was seen a as a national duty, not to drink alcohol. All of these arguments were used in propaganda which meant that it had a wide audience. WWI acted as a catalyst as it bought new arguments to help Prohibition spread across the country. As a result Prohibition was introduced soon after the US entered the war. Overall Prohibition was introduced in the US in 1919 because of what organisations did. They used many methods to persuade people, and they were successful due to the business and political endorsements they gained which helped them fund sensitive and religious propaganda. Furthermore, medical, social and moral arguments helped them attack the society with their views on alcohol and WWI helped strengthen these arguments.. Consequently, Prohibition was introduced. ...read more.