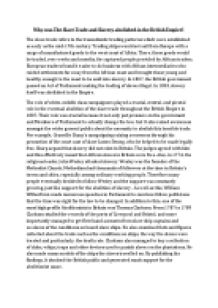 Why was The Slave Trade and Slavery abolished in the British Empire?

﻿Why was The Slave Trade and Slavery abolished in the British Empire? The slave trade refers to the transatlantic trading patterns which were established as early as the mid-17th century. Trading ships would set sail from Europe with a cargo of manufactured goods to the west coast of Africa. There, these goods would be traded, over weeks and months, for captured people provided by African traders. European traders found it easier to do business with African intermediaries who raided settlements far away from the African coast and brought those young and healthy enough to the coast to be sold into slavery. In 1807, the British government passed an Act of Parliament making the trading of slaves illegal. In 1833, slavery itself was abolished in the Empire. The role of white, middle class campaigners played a crucial, central, and pivotal role in the eventual abolition of the slave trade throughout the British Empire in 1807. Their role was crucial because it not only put pressure on the government and Members of Parliament to actually change the law, but it also raised awareness amongst the wider general public about the necessity to abolish this horrible trade. ...read more.

Their actions were important because they drew attention to how slaves were being treated. This had the effect of influencing public opinion as well as encouraging white middle class campaigners, such as William Wilberforce and black campaigners, such as Olaudah Equiano to continue their fight for change. This meant that by 1807, Parliament was under increasing pressure to abolish the trade. Some former slaves who had run away also eventually helped to end slavery. They wrote stories of their life on plantations which were soon read. For instance, Olaudah Equiano published a book in 1789, about his life story as a slave. This turned many people against slavery, as he described, first-hand, the brutal way he was treated. Furthermore, many slaves went on strike and demanded wages for their work; The slaves would burn down the crops and many houses of their owners. Many slaves also killed white plantation owners and set fire to the fields. Soon, French and English troops attempted to stop the revolts but failed in the process of doing so. The actions of black people, although necessary, could not change the law, but still had an important role because the actions of the slaves ...read more.

In 1792, this figure grew to 200,000 petitioners. Many meetings were held, with huge numbers of people gathering to hear abolitionist speakers and campaigners. Indeed, even when the slave trade was abolished in 1807, the campaigning of ordinary people continued, in an effort to end slavery. For example, in 1814 more than 1.5 million people signed petitions to get slavery banned throughout the British Empire. The actions of ordinary people were so important that their efforts gave further weight and credibility to the wider abolitionist campaigning of Clarkson, Sharp and Wilberforce in London. In conclusion, it seems clear that what really abolished the slave trade throughout the British Empire in 1807 was the interaction of a wide variety of factors. On their own, each factor could not have brought about the major change that occurred in 1807. However, on balance, it is still possible to argue that what really changed the law was the action of white, middle class campaigners, mainly because they were able to co-ordinate the protests and national campaigning. Without the government, together with the help of black people, ordinary members of the public in their millions, the economic arguments and the influence of new ideas, abolition would have been a more difficult issue to resolve. ...read more.