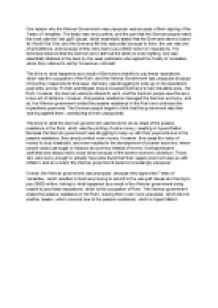 Why was the Weimar Government unpopular?

Transfer-Encoding: chunked ï»¿One reason why the Weimar Government was unpopular was because of their signing of the Treaty of Versailles. The treaty was very punitive, and the part that the German people hated the most was the ‘war guilt’ clause, which essentially stated that the Germans were to blame for World War One, and the Germans felt this was unfair because to them, the war was one of self-defence, and because of this, they had to pay £6600 million in reparations. The Germans believed that the German army still had the ability to keep fighting, and was essentially stabbed in the back by the weak ...read more.

Germany was struggling to keep up on its reparations payments, and so, French and Belgian troops occupied Germany?s main industrial area - the Ruhr. However, the German workers refused to work, and the German people saw this as a brave act of defiance. However, this passive resistance damaged the German economy, and so, the Weimar government ended the passive resistance in the Ruhr and continued the reparations payments. The German people began to think that the government was then working against them, contributing to their unpopularity. ...read more.