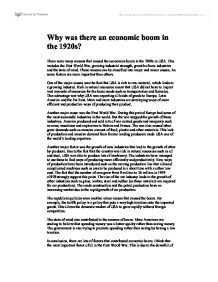 Why was there an economic boom in the 1920s? There were many reasons that caused the economics boom in the 1920s in USA. This includes the First World War, growing industrial strength, growth of new industries and the state of mind. These reasons can be classified into major and minor causes. As some factors are more important than others. One of the major causes was the fact that USA is rich in raw material, which leads to a growing industry. Rich in natural resources meant that USA did not have to import vast amounts of resources for the basic needs such as transportation and factories. This advantage was why USA was exporting all kinds of goods to Europe, Latin America and the Far East. ...read more.

This lack of production and massive demand from former leading producers made USA one of the world's leading exporters. Another major factor was the growth of new industries that lead to the growth of other by-products. Due to the fact that the country was rich in natural resources such as oil and steel, USA was able to produce lots of machinery. The industries have managed to use these to find ways of producing more efficiently and productively. New ways of production have been introduced such as the moving production line that allowed complicated machines such as cars to be produced in a short time with a rather low cost. The fact that the number of cars grew from 9 million to 26 million in 1919 o1929 strongly support this point. ...read more.

The state of mind also contributed to the reasons of boom. More American are starting to believe that spending money was a better quality rather than saving money. The government is also trying to promote spending rather than saving by having a low taxation. In conclusion, there are lots of factors that contributed economic boom. I think that the most important factor of all is the First World War. This is due to the downfall of European industries created by the war give USA the opportunity to gain the export market that used to belong to the European countries. The massive demand created by the war made America gain lots of profits in export. However the other factors such as growing industrial strength, republican policies and the growth of new industries also contributed as to why was there an economic boom in the 1920s in USA. ...read more.