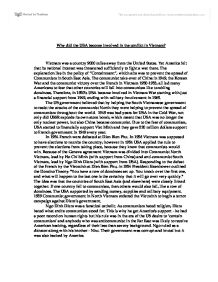 Why was USA involved in Vietnam War?

Why did the USA become involved in the conflict in Vietnam? Vietnam was a country 9000 miles away from the United States. Yet America felt that its national interest was threatened sufficiently to fight a war there. The explanation lies in the policy of "Containment", which aim was to prevent the spread of Communism in South East Asia. The communist take-over of China in 1949, the Korean War and the communist victory over the French in Vietnam 1950-1953, all led many Americans to fear that other countries will fall into communism like tumbling dominoes. Therefore, in 1950's USA became involved in Vietnam War starting with just a financial support from 1949, ending with military involvement in 1965. The US government believed that by helping the South Vietnamese government to resist the attacks of the communist North they were helping to prevent the spread of communism throughout the world. 1949 was bad years for USA in the Cold War, not only did USSR explode its own atom b**b, which meant that USA was no longer the only nuclear power, but also China became communist. ...read more.

Ngo ruled as a dictator along with his brother - Nhu. Their government was corrupt and brutal but it was also backed by America. In 1960 The National Liberation Front was set up in South Vietnam. It aimed to overthrow Diem, get rid of the Americans and reunite North and South Vietnam. In the same year John F. Kennedy became the President of the USA. He increased the number of military advisors from 100 to 1600 by 1963. He also helped to equip the South Vietnamese Army. In 1961 The US spent nearly $270 million in military support for Diem. At the same year J.F. Kennedy was assassinated and Lyndon Johnson became the new president of USA. Diem's unpopularity was so great that in November 1963, the South Vietnamese Army overthrew and killed him. The confusion at a political level in South Vietnam and the abuse of peasant's rights within the agricultural community were two reasons for the spread of communism within the south. Such a development alarmed the American President, Lyndon Johnson, who had asked his military chiefs to formulate plans with a full-scale war break out. ...read more.

This was a theory of the countries falling into communism, like countries in East Europe and Soviet Union. As a cause of this fear, the "Truman Doctrine" was declared when Truman was elected as new president of USA. The Doctrine justified any US intervention in other countries, if they are seen as oppressed and in need for rescue. USA saw Asian countries under the threat of communism and was keen to help them. They also saw Ho Chi Minh as a victim of Mao Tse Tung, which influenced North Vietnamese leader to become a follower of communism. Yet, that was a wrong assumption. The US involvement in Vietnam was guided by the idea that Vietnamese need to be saved from communism. Throughout the years, the US involvement was escalating, since it started with purely financial support, which in 1954 changed as US sent 'political advisors' and in the end US got involved with military force. Not only that USA failed to stop the spread the communism, which was the reason for getting involved in Vietnam, but it also brought them economic problems, loss of lives, negative reactions from its own people and a defeat in a country miles away from USA. ...read more.