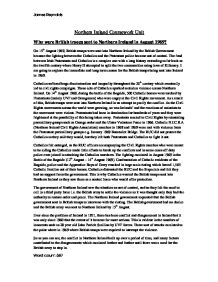 why were british troops sent in to northern ireland in 1969

Northern Ireland Coursework Unit Why were British troops sent to Northern Ireland in August 1969? On 15th August 1969, British troops were sent into Northern Ireland by the British Government because the fighting between the Catholics and the Protestant police became out of control. The feud between Irish Protestants and Catholics is a complex one with a long history extending as far back as the twelfth century where Henry II attempted to split the two communities using laws of Kilkenny. I am going to explore the immediate and long term causes for the British troops being sent into Ireland in 1969. Catholics suffered huge discrimination and inequality throughout the 20th century which eventually led to civil rights campaigns. ...read more.

Catholic N.I.C.R.A (Northern Ireland Civil Rights Association) marches in 1968 and 1969 were met with violence from the Protestant paramilitary groups e.g. January 1969 Burntollet Bridge. The RUC did not protect the Catholics as they said they would, but they left both Protestants and Catholics to fight it out. Catholics felt outraged, as the RUC officers accompanying the Civil Rights marches who were meant to be aiding the Catholics made little efforts to break up the conflicts and in some cases off duty police even joined in attacking the Catholics marchers. The fighting escalated in August 1969 in the Battle of the Bogside (12th August - 14th August 1969). ...read more.

The British government had no choice and the British army was sent to Northern Ireland by 15th August. Ever since the partition of Ireland in 1921, there has been conflict and disagreement in Ireland but it was only since 1960 that the extent of it became far more serious. This is evident in the murders of innocents such as 28 year old John Patrick Scullion by UVF forces. These sort of attacks escalated to the point where in 1969 where British troops were required to interrupt the violence. So as you can see, the conflict in Northern Ireland built up over a period of time, and many factors contributed to the disagreements which escalated further and further until there was a need for the British army to step in. James Reynolds Word count: 587 ...read more.