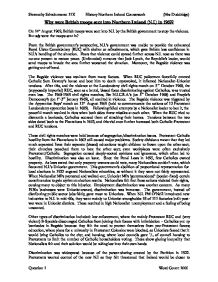 Why Were British Troops Sent into Northern Ireland in 1969?

Why were British troops sent into Northern Ireland (N.I.) in 1969? On 14th August 1969, British troops were sent into N.I. by the British government to stop the violence. But why were the troops sent in? From the British government's perspective, N.I.'s government was unable to provide the exhausted Royal Ulster Constabulary [RUC] with shelter or refreshments, which gave Britain less confidence in N.I.'s handling of the situation. Fears that violence could spread further across N.I. rose as there was no-one present to restore peace. (Unfounded) rumours that Jack Lynch, the Republic's leader, would send troops to invade the area further worsened the situation. Moreover, the Bogside violence was getting out-of-hand. The Bogside violence was resultant from many factors. When RUC policemen forcefully entered Catholic Sam Deveny's house and beat him to death unprovoked, it inflamed Nationalist-Unionist tensions. After this, and the violence at the Londonderry civil rights march on 5th October 1968, the (supposedly impartial) ...read more.

certain constituencies to gain optimum election results. Nationalists felt that these actions violated their rights, causing many to object to this injustice. Employment discrimination was another concern. As many 1930s businesses were Unionist-owned, discrimination was immense. The government, instead of distributing public sector jobs fairly, gave most to Unionists. When N.I. PM O'Neill introduced new industries to N.I. in mid-60s, they went mainly to Unionist strongholds: 95 of 111 factories built post-war were in Unionist districts. These resulted in high Nationalist unemployment and a feeling of being unwanted. Other types of discrimination included: law enforcement, where the mainly-Protestant RUC and (very violent) B-Specials discouraged Catholics from joining their forces with intimidation - Catholics put up barricades in Bogside because they felt the need to protect themselves from pro-Protestant forces; education, where plans for a university in Protestant Coleraine were blocked, as Unionists feared that it would bring Catholics to the city; and housing, where local councils gave 2/3 of council housing to Protestants to limit the number of Catholic householders voting. ...read more.

Catholics used events such as the massacres at Drogheda in 1649, the enforcement of the Penal Laws in 1695, and the Irish Potato famine in 1845 as examples of British mistreatment. Many felt that their views were ignored, and joined extremist groups to be heard. As everything was so much harder if you were Catholic, they felt that violence was the only way to get their viewpoints across. I conclude that British troops were sent into N.I. because of discrimination. The Nationalists' loss of faith in the biased political system and law enforcement caused them to defend themselves and put up barricades, as they felt that they had to protect themselves from pro-Protestant forces. However, discrimination would not have occurred if Ireland had not been Partitioned, which further heightened Protestant-Catholic tensions But Partitioning would not have occurred if James I had not planted Protestants in Ulster in 1603. The two faiths living side-by-side started the tensions in the first place. ?? ?? ?? ?? Sivamathy Selvakumaran 11X History Northern Ireland Coursework (Mrs Duddridge) Question 1 Word Count: 1000 ...read more.