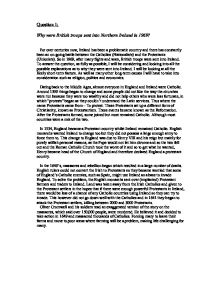 Question 1: Why were British troops sent into Northern Ireland in 1969? For over centuries now, Ireland has been a problematic country and there has constantly been an on-going battle between the Catholics (Nationalists) and the Protestants (Unionists). So in 1969, after many fights and wars, British troops were sent into Ireland. To answer the question, as fully as possible, I will be considering and looking into all the possible explanations as to why they were sent into Ireland. I will be looking at all the likely short-term factors. As well as many other long-term causes I will have to take into consideration such as religion, politics and economics. Dating back to the Middle Ages, almost everyone in England and Ireland were Catholic. Around 1500 things began to change and some people did not like the way the churches were run because they were too wealthy and did not help others who were less fortunate, in which "protests" began as they couldn't understand the Latin services. Thus where the name Protestants came from - To protest. These Protestants set up a different form of Christianity, known as Protestantism. These events became known as the Reformation. After the Protestants formed, some joined but most remained Catholic. Although most countries were a mix of the two. ...read more.

The small amount of Protestants living in Ireland liked living inside the Union with the UK, as there wasn't as many of them. There was increasing support for the granting of Home Rule (self-rule) especially after 'the Famine' in which millions of people died when there was a failure of potato crops in Ireland due to a fungus disease, which caused over a million people to die mainly in the rural areas. The British tried to help and sent over �100,000 worth of maize from America to feed the starving and when the crop failed the next year almost wiping out all potato crops, they opened soup kitchens and workhouses but this did not reach many people and a lot of deaths were caused. Many of the Irish eventually immigrated to America. Some of the Irish began to dislike England and thought they could've done more. Although there couldn't have been much more for England to do and the Irish should not have relied on a single crop so much. The Protestants did not like the fact that there was a rising for the Home Rule and wanted the Union to remain strong as ever. The Nationalists only wanted one united nation called Ireland and were beginning to get impatient, they took up arms against the British. ...read more.

In 1968, Northern Ireland has been peaceful for almost 30 years but there were still people that are discriminated against in their everyday lives, which is upsetting. The Northern Ireland Civil Rights Act (NICRA) was set up to do something about it. The leaders were mostly Catholic but even some Protestants joined when they found out how much prejudice Catholics experience. The marches and the violence that comes with it is what started "the troubles", breaking the peace once again. The protests started with NICRA and a Catholic family with children not being put ahead for a council house, instead a single Protestant woman who worked for a member of the Unionist Party got the house instead. A member of NICRA staged a sit-in and got removed but received a lot of press and TV coverage. Over the last few months 1968, NICRA had some civil rights marches and the government of Northern Ireland finally reacted to it and passed some reforms: * Council housing had to go to the neediest families first, whatever their religion. * The Londonderry council was suspended because of the unfairness of the city's voting system, which ensured that Unionists controlled the city council. In January 1969, 40 students started a three-day march from Belfast to Londonderry to protest about the reforms and how there weren't doing enough for the Catholics of Northern Ireland. ?? ?? ?? ?? ...read more.