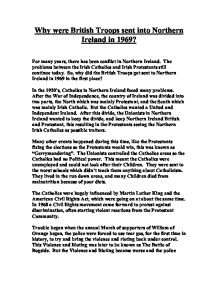 As the tension grew, segregation grew. In cities like Londonderry and Belfast, many people who live in the wrong area, such as Catholics in a Protestant area, and vice versa, were forced to leave there homes. The Battle of Bogside was a key point in the reasons of the Troops being sent to Northern Ireland. On 12th August, as the Apprentice Boys Parade passed the largely Catholic populated area of Bogside, serious rioting occurred. The RUC (Royal Ulster Constabulary) entered Bogside, using Armoured Vehicles and water cannons, in an attempt to end the Rioting. The RUC were closely followed by a group of Loyalist. The local residents of Bogside managed to force the RUC and the Loyalists out of the neighbourhood. That is when the RUC used Tear gas to gain entry to the Bogside area once again. As the next day came, serious rioting spread across Northern Ireland, from Derry to other Catholic areas, causing the RUC to have to stretch, and they were already outnumbered. The rioting deteriorated in to Sectarian Conflict, between the Catholics and Protestants. ...read more.

And so in 1969 the IRA split into the two groups I said about and they both fought against the British Troops when they arrived. The British Government feared there would be a Civil War and that the Conflict would spill into British Cities such as London, Birmingham Manchester, these were the cities with a high population of Irish living there. The British Army was sent in as a temporary measure to earn the Government more time, and to regain control as asked by the New Prime Minister. So the information from my learning I can conclude that the reason the British Troops were sent in was part of a long history of partition between North and South, causing violence between the Protestants and the Catholics. Bringing in the Soldiers was expected to bring in an end to the Violence and hospitalities between Catholics and Protestants, but in fact, the relations between them got worse. The conflict between these two groups became so violent that Ireland had to be divided. Some Catholics found themselves in the minority in the Protestant controlled North, where they were treated unfairly sparking a series of Civil Rights marches in the late 1960's. The violence escalated, and this is why British Troops were sent to the area to maintain the peace. ...read more.