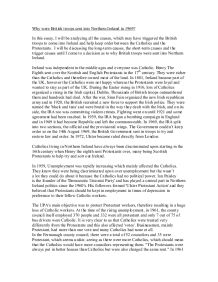 Why were british troops sent into northern ireland in 1969?

Top of Form Why were British troops sent into Northern Ireland in 1969? In this essay, I will be analyzing all the causes, which may have triggered the British troops to come into Ireland and help keep order between the Catholics and the Protestants. I will be discussing the long-term causes, the short-term causes and the trigger causes until I come to a decision as to why British troops were sent into Northern Ireland. Ireland was independent in the middle ages and everyone was Catholic. Henry The Eighth sent over the Scottish and English Protestants in the 17th century. They were richer than the Catholics and therefore owned most of the land. In 1801, Ireland became part of the UK, however the Catholics were not happy whereas the Protestants were loyal and wanted to stay as part of the UK. During the Easter rising in 1916, lots of Catholics organized a rising in the Irish capital, Dublin. Thousands of British troops outnumbered them and hundreds had died. After the war, Sinn Fein organized the new Irish republican army and in 1920, the British recruited a new force to support the Irish police. They were named the 'black and tans' and were brutal in the way they dealt with the Irish, and on its side, the IRA too was committing violent crimes. Fighting went on until 1921 and some agreement had been reached. In 1939, the IRA began a bombing campaign in England and in 1949 it had become Republic and left the commonwealth. In 1969, the IRA split into two sections, the official and the provisional wings. The Government couldn't keep order so on the 14th August 1969, the British Government sent in troops to try and restore law and order. In 1972, Ulster became ruled directly from London. Catholics living in Northern Ireland have always been discriminated upon starting in the 16th century when Henry the eighth sent Protestants over, many being Scottish Protestants to help try and sort out Ireland. ...read more.

He had always believed that the Protestants had feared and discriminated against the Catholics. He also influenced a lot of people because; he once had been the Prime Minister of Northern Ireland and was experienced in the matter about the hatred between the two religions. In a newspaper article in 1968, he told them "There is a feeling of resentment, this is nothing to do with religion at all." By this, he meant that the two religions were not fighting because of the religion; it was because they had grown to hate each other so much that they just didn't want to get along with each other. He mentioned, "How can you giver somebody who is your enemy a higher position in order to allow him to come out and destroy you?" This would have annoyed the Catholics because it was true and there wasn't much they could do about it. In the United States of America, Black people were not treated fairly, just like the Catholics in Ireland. The blacks resorted to non-violent methods, and by doing this they were given equal rights. The Catholics realized that maybe is they stopped using violence and started using non-violence methods instead; they too could have equal rights. In 1967, the NICRA was formed and their main objective was to use peaceful, non-violent means to obtain reforms and changes. Civil rights leaders encouraged homeless Catholics to squat in the council houses which were supposed to be given to Catholics but were going to end up being given to the Protestants. As a result of this, the 'Derry Housing Action Committee' was formed who also encouraged homeless Catholics to squat. An incident, which happened when a Catholic family were found living in a caravan. They had been refused a house and they stopped traffic by parking their caravan in the middle of a street. They were then given a house, which proved that their non-violent methods were working. ...read more.

So many milk bottles had been used, that a total of 43,000 bottles were reported missing/stolen by local milkmen, during the time of one week. Jack Lynch, the Prime Minister of the Irish Republic was outraged that the Northern Police were not protecting the Catholics. He made a strong speech on television, criticizing the Northern Ireland Government. "It is evident that the Stormont Government is no longer in control of the situation. Indeed, the present situation is the inevitable outcome of the policies pursued for decades by the successive Stormont Governments. It is clear that the Irish Government can no longer stand by and see innocent Catholics injured and perhaps more." The British Government had finally had enough and so they sent in British troops into Belfast and Londonderry to try and restore law and order. When the British arrived, relieved and very happy Catholics greeted them. However, not everybody was so happy. The Protestants were angered because their fellows Protestants were sticking up for the Catholics. Following this, the British Government even tried to persuade Unionist leaders to introduce reform, but this had failed as well, in spite of everything. In conclusion, I would argue that there were a couple of reasons, which I believe were the main reasons as to why British troops were sent into Northern Ireland. One would be that, in 1968, after a march, which occurred in Derry, when many people living in the rest of Ireland and Britain were shown footage of the march and it clearly showed how badly the Catholics were being treated. This suggests that for many people, it was the first they had seen of such behavior. Because so many people were outraged, it could have influenced the Great British Government to send British troops to be sent in to help. The fact that the Government were being ignored plays a big part in sending in the troops, this is because they had lost control of everything and did too little too late, which meant if they had received no help, anything and everything could have happened. ...read more.