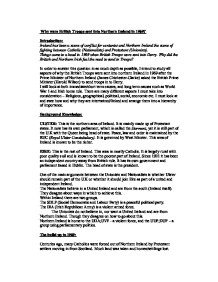 Why were British Troops sent into Northern Ireland in 1969? Introduction: Ireland has been a scene of conflict for centuries and Northern Ireland the scene of fighting between Catholic (Nationalists) and Protestant (Unionists). Things came to a head in 1969 when British Troops were sent into Derry. Why did the British and Northern Irish feel the need to send in Troops? In order to answer this question in as much depth as possible, I intend to study all aspects of why the British Troops were sent into northern Ireland in 1969 after the Prime Minister of Northern Ireland (James Chichester-Clarke) asked the British Prime Minister (Harold Wilson) to send troops in to Derry. I will look at both immediate/short term causes, and long term causes such as World War 1 and Irish home rule. There are many different aspects I must take into consideration - Religious, geographical, political, social, economic etc. I must look at and state how and why they are intertwined/linked and arrange them into a hierarchy of importance. Background Knowledge: ULSTER: This is the northern area of Ireland. It is mainly made up of Protestant states. It now has its own parliament, which is called the Stormont, yet it is still part of the U.K with the Queen being head of state. Peace, law and order is maintained by the RUC (Royal Ulster Constabulary). ...read more.

Ireland were fighting for Britain. Irishman Sir Roger Casement had arranged to travel to neutral America during the war and collect the weapons. Therefore going against the allies (which included Britain alongside France and Russia). British Naval Intelligence intercepted the ship carrying the weapons after cracking a code between both parties. On Good Friday, Casement was immediately arrested when he came a shore from a U-boat near to Tralee in County Kerry. When added to the fact that many Irish men were dying for the British side when they didn't want to, this made the Irish Nationalists very angry indeed. They stated that they were only willing to die for an ideal. On the 24th April (Easter Monday) 1916, the Irish Republican Brotherhood decided that they had had enough, they wanted back the Home Rule bill, and did not want to die for the British. They called themselves the rebels and seized the centre of Dublin. From the steps of the General Post Office Padraig Pearse, who along with James Connolly and followers had wanted to end British rule and make Ireland independent, declared that the rebels were a provisional government of the Republic of Ireland. GB Forces surrounded the rebels. After 6 days of fighting nearly 500 people had been killed and around 2000 injured. Pearse then surrendered. People were shocked at the events that had happened in Dublin, but their viewpoints soon changed when they realised the punishment was to be the death of 77 Catholics. ...read more.

What came to be known as the Battle of the Bogside had ended with intervention from Britain. 5 Catholics and One Protestant were killed on the 14th of August 1969. Conclusion: After studying the events taking place in Ireland and Northern Ireland before 1969 and the events during that year, I have concluded that, in my opinion the main reason for the British troops being sent in to Northern Ireland have been the majority of events from World War I onwards. After the arrest of Sir Roger Casement the Irish bitterness and need to rebel grew and grew. Events such as World War I angered Catholic Ireland causing rebellion in ways such as the Easter Rising of 1916, which in turn angered the Protestants of Northern Ireland. Each side in turn angered the other through out this period in both politics and the use of violence. Therefore I can not see one single main reason as to why the Battle of the Bogside took place. I feel that events such as the Easter Rising, Burntollet Bridge and the Black Civil Rights Movement in America, teamed with many other actions and events caused a mutual hatred from both sides which finally turned into the violence at Bogside. Though the main reason for the British Troops was definitely (in my opinion) the Battle of the Bogside which had led to Ireland being on the brink of civil war. Sadly, the conflicts in Ireland and Northern were never fully solved and the troubles between Catholics and Protestants still go on today. ...read more.