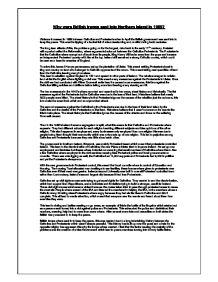 Why were British troops sent into Northern Island in 1969?

Why were British troops sent into Northern Island in 1969? Violence increased in 1969 between Catholics and Protestants when in April the British government was sent into to keep the peace. This was the tipping of a bucket full of misunderstanding and conflict dating back centuries. The long term effects of this, the problems going on for the longest, date back to the early 17th centaury. It started with a period called the Reformation, where arguments broke out between the Catholics Protestants. The Protestants that the Catholics where corrupt out of touch from its people, King Henry VIII broke away from the pope and became an independent Protestant country with him at the top. Ireland still remained a strong Catholic country, which could be used as a base for enemies of England. To solve this James I Henrys predecessor, set up the plantation of Ulster. This meant settling Protestants loyal to king and country on land who belonged to Catholic opponents of the crown. This meant taking vast quantities of land from the Catholics leaving many homeless. ...read more.

Historians believe that it wasn't uncommon for events like this to take place. The street history is that Catholics ignore the causes of the attacks and focus on the suffering Cromwell caused. Then in the 1960's Ireland became segregated or split, what this means is that Catholics and Protestants where separate. They had different schools for each religion teaching different subjects and bias opinions of the other religion. This also happened in employment, many businesses only employed from one religion this was due to people being hired thought their community which was only made up of one religion. This led to prejudice among Catholics and Protestants because they new little about each other. The government in Northern Ireland, Stormont, was mainly Protestant based which meant that protestants controlled Ireland. This lead to the discrimination of Catholics, the new Prime minister tried to improve Ireland. He set up new employment and factories but theses where Unionist run meaning that small numbers of Catholics where hired. ...read more.

Working class Protestants where angry because they had similar lives to Catholics and didn't complain. This all lead to media attention, which meant that everyone saw the events and heard about them how ever bias they were. This lead to rioting and battles creating no go areas, an example of this is the battle of the Bogside which started out as a peace march turned into a riot against police and Protestants. This exhausted the police and diminished their numbers, meaning help had to come from some where. After several more riots and casualties on both sides the British Army was sent in to keep the peace. British troops where sent in to keep the peace, this was needed due to a long intertwining history between the Catholics and Protestants which wasn't always peaceful. This history has built up over the years and a hate for the opposite religion has appeared this why the troops where needed. I feel that the factor causing the majority of the problems was the creation of a bias Government which lead to peace marchers turning into b****y battle fields. ?? ?? ?? ?? ...read more.