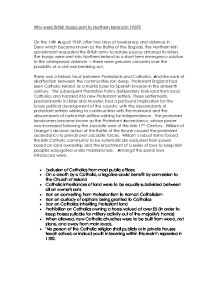 Why were British troops sent to Northern Ireland in 1969? On the 14th August 1969, after two days of lawlessness and violence in Derry which became known as the Battle of the Bogside, the Northern Irish government requested the British army to restore peace amongst its rioters. The troops were sent into Northern Ireland as a short term emergency solution to the widespread violence � there were genuine concerns over the possibility of a civil war breaking out. There was a historic feud between Protestants and Catholics. And the roots of disaffection between the communities ran deep. Protestant England had seen Catholic Ireland as a hostile base for Spanish invasion in the sixteenth century. The subsequent Plantation Policy deliberately took land from local Catholics and handed it to new Protestant settlers. These settlements, predominantly in Ulster and Munster, had a profound implication for the future political development of the country, with the descendants of protestant settlers wishing to continue links with the mainland and the descendants of native Irish settlers wishing for independence. ...read more.

Subsequent attempts by nationalists to achieve independence were met by the formation of the Orange Order in the late 18th century. Its' principal aim was to stifle the efforts of Irish nationalists and to uphold the Protestant Ascendancy. However, it's decline through the 19th century was reversed by the growing movement of Home Rule. Protestants had long recognised they would be a minority in a united, independent Ireland. They also understood that Ulster had long been the most prosperous of the Irish provinces. Farming and industry flourished there and Belfast was a thriving port. Their opposition to Home Rule grew, with the slogan 'Ulster will fight and Ulster will be right' becoming popular amongst Unionists, who secured opt outs for six of the nine Ulster counties from Home Rule proposals. Northern Ireland had been created following partition in 1921 ; with a population 60% Protestant and 40% Catholic. The state was given its own parliament that could make its own legislation. ...read more.

O'Neill was ousted and his less reform minded successor, Chichester-Clark was seen as the best possible compromise candidate by the Government in Westminster. Chichester-Clark was concerned about denying his Protestant base their Apprentice Boys march in Derry in 1969 and believed to do so would weaken his position. Although alarmed, London agreed to Chichester-Clark's request. The Orangemen's insistence on marching through Catholic areas was designed to assert their supremacy over the territory. The mobilisation of the paramilitary B-Specials (effectively a sectarian law enforcement tool which had long been a focus of the civil rights reformers concerns) to suppress any Catholic rioters, further infuriated the nationalists. Ferocious fighting ensued and hence the troops were sent to the province. The introduction of British troops to the province was especially ironic because they were there sent to protect Catholics against Unionist aggression. In due course, they were to become symbolic of British rule in the province, becoming a regular target of Republican hostility. 0 ...read more.