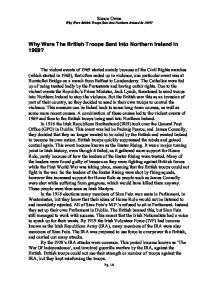 Why Were The British Troops Sent Into Northern Ireland In 1969?

Why Were The British Troops Sent Into Northern Ireland In 1969? The violent events of 1969 started mainly because of the Civil Rights marches (which started in 1968), that often ended up in violence, one particular event was at Burntollet Bridge on a march from Belfast to Londonderry. The Catholics were fed up of being treated badly by the Protestants and having unfair rights. Due to the violent events the Republic's Prime Minister, Jack Lynch, threatened to send troops into Northern Ireland to stop the violence. But the British saw this as an invasion of part of their country, so they decided to send in their own troops to control the violence. This measure can be linked back to some long-term courses, as well as some more recent causes. A combination of these causes led to the violent events of 1969 and then to the British troops being sent into Northern Ireland. In 1916 the Irish Republican Brotherhood (IRB) took over the General Post Office (GPO) in Dublin. This event was led be Padraig Pearce, and James Connolly, they decided that they no longer wanted to be ruled by the British and wanted Ireland to become its own nation. British troops quickly suppressed the rebels and gained control again. This event became known as the Easter Rising. It was a major turning point in Irish history, even though it failed, as it gathered more support for Home Rule, partly because of how the leaders of the Easter Rising were treated. ...read more.

They did not accept each other. As the Protestants did not want Catholics to have any power, even locally, the election boundaries were changed so that Catholics were in the minority, and only rate payers had votes. This is called Gerrymandering, and strongly favored the Protestant ratepayers. Another way in which the Catholics were discriminated against was in the allocation of housing, especially council housing. They were only allocated the worst housing, and had to live in appalling conditions. A special police force was also set up by the Protestants, called the B-Specials. The B-Specials had the power to arrest Catholics without any real reason, and without a trial. The B-Specials harassed the Catholics, and were even involved in, and started, violent attacks on Civil Rights campaigners, in the late 1960's. The Protestants did not give Catholics for another reason. If the Catholics gained power in the North they would have Rome Rule controlling their powers, where they are ruled by the Pope, and must obey his orders. The Protestants did not like the idea of this, as they would have to give up some of their rights, and not be able to do certain things. For example there would be no divorces and no abortions. This would completely change the Protestants way of life, so to ensure that this did not happen the Protestants deprived the Catholics of some of their rights, and any chance of power. Terrance O'Neill became Prime Minister, of Northern Ireland, in 1963. ...read more.

British troops were sent in to Northern Ireland in 1969 because of many causes, some long term and some shorter-term events and causes. However all of these causes can be traced back to one thing, probably the most important factor in this. The partition of Ireland. If the partition did not take place then the Protestants would not have discriminated against the Catholics as much, as they would not have had as much power and control. The second most important factor in this was the actual discrimination against the Catholics, as if the Catholics had not been discriminated against, and treated so badly, there would not have been the Civil Rights protests, which often led to, and ended in violence. Violence was a major reason why troops were sent in. Thirdly are the Civil Rights marches, which led to the violence, and were the final, main, contributing factor to why the troops were sent in. The British troops were sent in because of all the factors in this essay, but most of these factors would not have existed if Ireland had not been partitioned in 1921, which led to both sides fighting each other to try and get what they wanted. The partition also allowed for there to be discrimination by the Protestants against the Catholics in Northern Ireland as the Catholics were in the minority and could easily be controlled by the large number of Protestants. Simon Owen. Simon Owen Why Were British Troops Sent Into Northern Ireland In 1969? Pg. 1/4 ...read more.

This essay shows very good knowledge and understanding of the period. The key thing that would have improved this essay would have been much earlier grouping and labelling of the causes. Short term and long term would have been an appropriate way of grouping them. This would have helped to give more of a judgement about which causes are the more important ones. Paragraphs also needed to be structured around key points so that the essay does n ot become a long story. ***