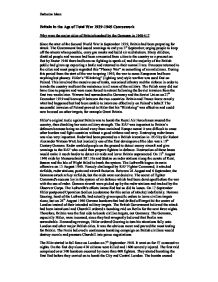 Britain in the Age of Total War 1939-1945 Coursework Why were the major cities of Britain bombed by the Germans in 1940-41? Since the start of the Second World War in September 1939, Britain had been preparing for attack. The Government had issued warnings as early as 3rd September, urging people to keep off the streets when possible, carry gas masks and build air raid shelters. Many children, disabled people and women had been evacuated from cities to the country as a precaution. But by Easter 1940 there had been no fighting to speak of, and the majority of the British public had given up expecting a battle and returned to their normal lives. Evacuees returned to the cities and most people regarded this "Phoney War" as something of an anticlimax. During this period from the start of the war to spring 1940, the war to some Europeans had been anything but phoney. Hitler's "Blitzkrieg" (lighting war) style warfare was used first on Poland. This involved the massive use of tanks, motorised infantry and the airforce in order to invade the country and beat the resistance in all areas of the military. The Polish army did not have time to prepare and were soon forced to retreat following the Soviet invasion from the East two weeks later. Warsaw had surrendered to Germany and the Soviet Union on 27th December 1939 and been split between the two countries. Britain and France knew exactly what had happened but had been unable to intervene effectively on Poland's behalf. The successful invasion of Poland proved to Hitler that his "Blitzkrieg" was effective and could now be used on other targets, for example Great Britain. Hitler's original tactic against Britain was to bomb the Royal Air Force bases around the country, thus disabling her main military strength. The RAF was important to Britain's defences because being an island away from mainland Europe meant it was difficult to cross other borders and fight countries without a good airforce and navy. ...read more.

Houses were damaged, sometimes completely destroyed, and school or work was often interrupted by the air raid siren. The bombers came in wave after wave, scarcely giving the cities time to "catch their breath." Particularly badly affected areas were industrial cities such as Coventry and Liverpool. Coventry was the centre of Britain's war production and Liverpool was the country's main northern port. The air raid on Coventry on the night of 14th November 1940 was the single most concentrated attack on a British city in World War II. More than 43,000 homes, just over half the city's housing stock, were damaged or destroyed in the raid. Liverpool was Hitler's second main target after London, as Submarine warfare had not closed traffic to it as expected. May 3rd 1941 was Liverpool's worst night of the Blitz. There were over 800 incidents in the city reported; both cathedrals were hit, public libraries and other buildings were destroyed, including the city's oldest building, Bluecoat Chambers. However the largest explosion of the night was the blowing up of the S.S. Malakand, a steamer belonging to the Brocklebank line. She was carrying over 1000 tons of shells and bombs destined for the Middle East. Nearly 100 Liverpudlians and sailors were killed on this night. The London Blitz, perhaps the most famous for its mass destruction and highest death tolls, was the worst because the city held Parliament, many old buildings, factories and ships. The East End in particular was badly hit, because of the docks and factories. The effect on the people was dramatic, but civilians soon pulled together and joined in on the war effort, be it collecting shrapnel for munitions or helping clear wrecked houses. In homes, bomb shelters were hastily assembled. Although the Home Secretary had called for bomb sheltering precautions to be taken as early as 1937, the start of the Blitz changed the opinions of cynics and shelters appeared in many homes. ...read more.

As cinema was the most popular form of public entertainment during the 1940's, short and feature-length propaganda films were made by the Government regarding the Blitz and other aspects of the war. "In Which We Serve" was a film about the navy; "F for Freddie" told the story of a bombing mission over Germany and "Went the Day Well?" told the imaginary story of an invasion of Britain that was defeated by a village community. These all served to boost morale and draw attention away from the traumatic effects of the war. The Government did not try to prevent news of particularly serious defeats from being published as it had during the First World War, mainly apparently minor setbacks. However, the evacuation of Dunkirk was described as the "Miracle of Dunkirk", which not only made it sound a lot less like a disaster, but it also suggested that there was some religious significance to the escape. During the war attendance at church services rose dramatically and the Government was quite prepared to make use of this to help its war plans. As well as disguising losses, the Government exaggerated Allied victories. This was in the hope that successes would overshadow the bad effects of the Blitz, and worked. On 15th September 1940, for example, after a massive daylight air raid on London, it was announced on the BBC Home Service that, according to official figures, 180 German planes had been downed by anti-aircraft guns. In fact the number was only about 60. People believed that the BBC, a long-standing and respectful broadcaster, was telling the truth and used it as their primary source of information. This was useful to the Government as the BBC worked closely with Parliament so could easily be controlled. Of course, on VE Day the press was full of positive news and amongst the street parties many forgot the short-term effects of the Blitz to enjoy the country's success because they were simply not mentioned in the news. ...read more.