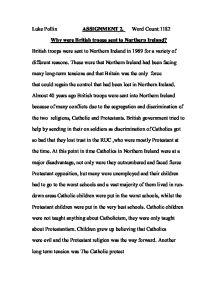 Why were troops sent to Northern Ireland

Luke Pollin ASSIGNMENT 2. Word Count:1182 Why were British troops sent to Northern Ireland? British troops were sent to Northern Ireland in 1969 for a variety of different reasons. These were that Northern Ireland had been facing many long-term tensions and that Britain was the only force that could regain the control that had been lost in Northern Ireland. Almost 40 years ago British troops were sent into Northern Ireland because of many conflicts due to the segregation and discrimination of the two religions, Catholic and Protestants. British government tried to help by sending in their on soldiers as discrimination of Catholics got so bad that they lost trust in the RUC ,who were mostly Protestant at the time. At this point in time Catholics in Northern Ireland were at a major disadvantage, not only were they outnumbered and faced fierce Protestant opposition, but many were unemployed and their children had to go to the worst schools and a vast majority of them lived in run- down areas Catholic children were put in the worst schools, whilst the Protestant children were put in the very best schools. ...read more.

Also they maybe threatened with violence by the IRA to become a part of the republic of Ireland. The Police in Northern Ireland were 99.9% Protestant and extremely unfair and violent towards Catholics, they would even attack innocent Catholics for no reason .On some occasions the Police even led the Catholic marchers into traps, here they were met by violent Protestant Unionists, the outcome was inevitable, violence. The 'B- Specials' were created - this was a unit within the police, that were 99.9% Protestant. They were called in by the Unionists, to act like a police force, they were violent to the Catholics aswell. Another reason to cause problems in Northern Ireland was the Act of Union, this meant that Irelands parliament was closed and England had control over Irelands law, which were passed in Westminster in London. For example, there were certain restrictions on the jobs that Roman Catholic could do under English rule. The main cause of this whole all this was the Battle of Bogside. Before this was the annual Apprentice Boys March in Londonderry. ...read more.

There was a danger of the violence spreading across the province, tension started to build in many towns, the most serious fighting was in Belfast, the Catholics were attacked by the Protestants who were afraid that the country was being invaded. James Chichester-Clark had little choice but to call the British Troops into Northern Ireland. The British army was seen as a neutral force, they would not take sides like the RUC did. There were many reasons why British Troops were sent to Northern Ireland. The official reason was to protect the catholic population against Loyalist attacks however it was soon realised that this was not in fact their intention and that the conflict that they were involved in were not always benefiting the Catholics but rather the Protestants, there increased involvement with the RUC also caused British to be hated amongst Catholics. The last of the reasons was that British believed that the IRA was planning to launch an uprising in Belfast. Such a large force as the IRA could cause havoc throughout Northern Ireland if it was not stopped in time. But the British were wrong because the IRA were lacking weapons, manpower and even the support to plan such an attack ...read more.