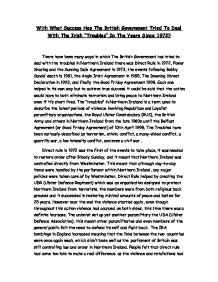 With What Success Has The British Government Tried To Deal With The Irish Troubles In The Years Since 1972?

With What Success Has The British Government Tried To Deal With The Irish "Troubles" In The Years Since 1972? There have been many ways in which The British Government has tried to deal with the troubles in Northern Ireland there was Direct Rule in 1972, Power Sharing and the Sunning Dale Agreement in 1973, the events following Bobby Sands' death in 1981, the Anglo Irish Agreement in 1985, The Downing Street Declaration in 1993, and finally the Good Friday Agreement 1998. Each one helped in its own way but to achieve true success it could be said that the action would have to both eliminate terrorism and bring peace to Northern Ireland even if it's short lived. The "troubles" in Northern Ireland is a term used to describe the latest periods of violence involving Republican and Loyalist paramilitary organizations, the Royal Ulster Constabulary (RUC), the British Army and others in Northern Ireland from the late 1960s until the Belfast Agreement (or Good Friday Agreement) of 10th April 1998. The Troubles have been variously described as terrorism, ethnic conflict, a many-sided conflict, a guerrilla war, a low intensity conflict, and even a civil war. Direct rule in 1972 was the first of the events to take place, it was needed to restore order after b****y Sunday, and it meant that Northern Ireland was controlled directly from Westminster. This meant that although day-to-day items were handled by the parliament within Northern Ireland, any major policies were taken care of by Westminster. Direct Rule helped by creating the UDR (Ulster Defence Regiment) ...read more.

However some people decided the only way to help was to unite behind the IRA; this meant that a negative effect of this event was to dramatically raise the amount of support for the IRA. Overall this event was quite successful as it united allot of people however the British government showed a negative attitude towards the whole situation being that the support born of this event went not to the British but to the IRA. If the British had created a person or party for the supporters to rally round this could have been then end to the troubles. This event links in a triangle with Direct Rule and the Anglo-Irish Agreement as these are the actions mainly focused on terrorism it also links to the Anglo-Irish agreement because they both involve Margret Thatcher. In the theoretical list of effectiveness Bobby Sands' death would be fourth. Next is the Anglo-Irish agreement in 1985, this agreement was set up between Margaret Thatcher (Prime Minister of the United Kingdom) and Garret Fitzgerald (Taoiseach of Ireland). It aimed to stop the IRA's violence on both England and Northern Ireland, and reduce support for Sinn Fein. Margret Thatcher thought the only way to resolve the issues would be to get the Republic of Ireland involved in the affairs or Northern Ireland. This would in theory of had a calming effect, the Republic was in a state of peace, the thoughts of Eire would help restore order to Northern Ireland. It would also prevent Eire feeling undermined by finding out the future of their own country from members of another nation. ...read more.

In all fairness the British government have had a lot of success controlling the troubles; putting all the attempts together they have reduced terrorism a great deal. They also brought peace to Northern Ireland and took away a lot of the tension between parties, and established strong links between Northern Ireland and Eire allowing both peaceful communication and Eire's opinions and inputs. The only down side to this was taking thirty six years to bring this country to peace but it happened. Present day Northern Ireland thanks to the combined efforts of all these actions and events is finally in a state of peace and harmony. The thanks for this can be given to the British government for their ideas and actions. However credit also is due to Dr. Mo Molam for her ideas and commitment during the Good Friday Agreement without her even this successful action wouldn't have lasted. Finally the American Government played a major role by bringing in a neutral party to the chaos and creating communications, and having a clear headed out look on things. The most effective by far was the Good Friday Agreement for the simple fact that it lasted, it reduced terrorism and restored communications that's all that's needed for it to be successful but this action is still currently doing both those things. The least effective has to be Power Sharing and the Sunning Dale Agreement; even though it was a lovely idea it was too idealistic and didn't change much at all. Everything seemed to stay the same just more people became annoyed, and others happy it didn't bring peace and didn't resolve anything, therefore can never be classed as successful. ...read more.